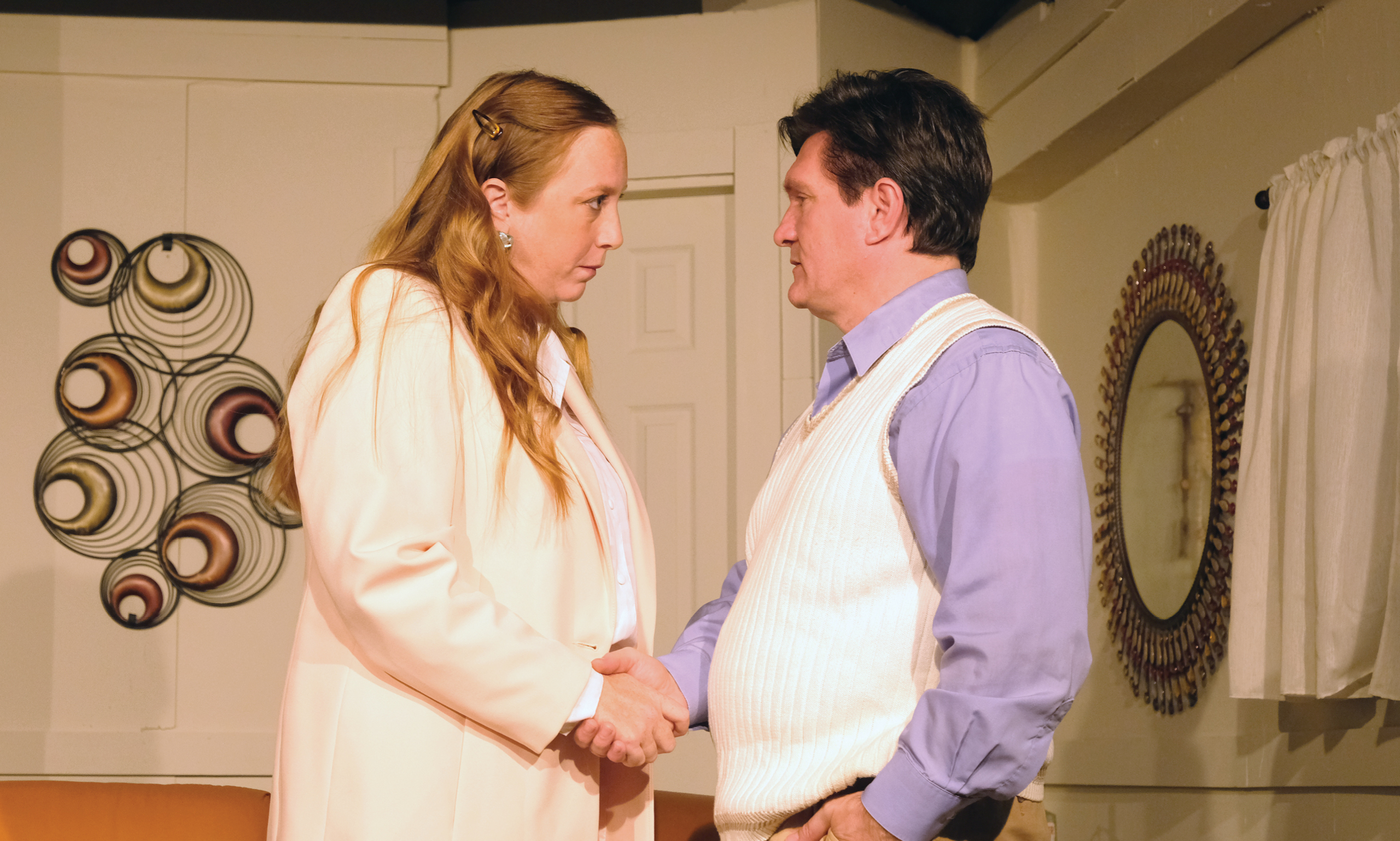 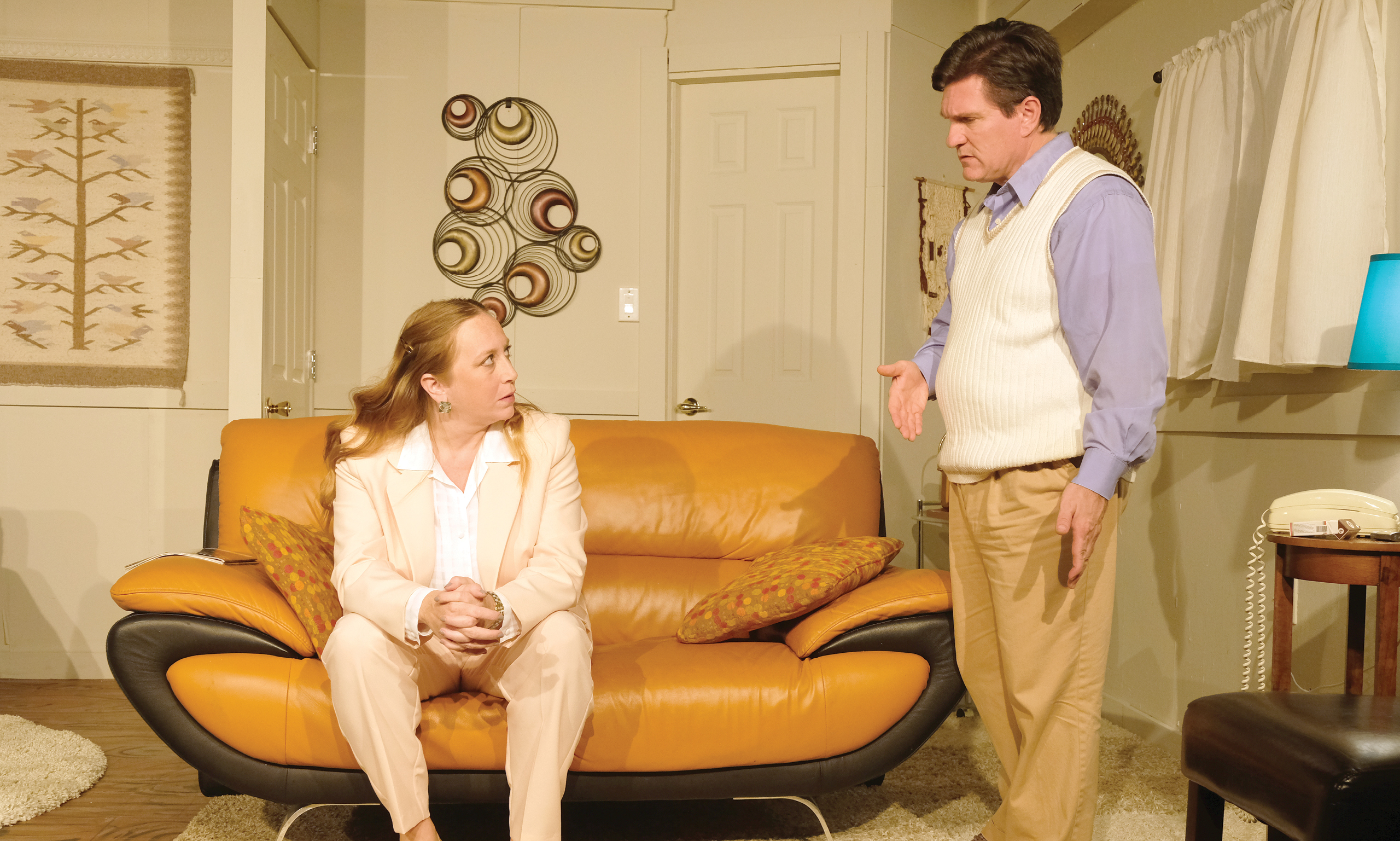 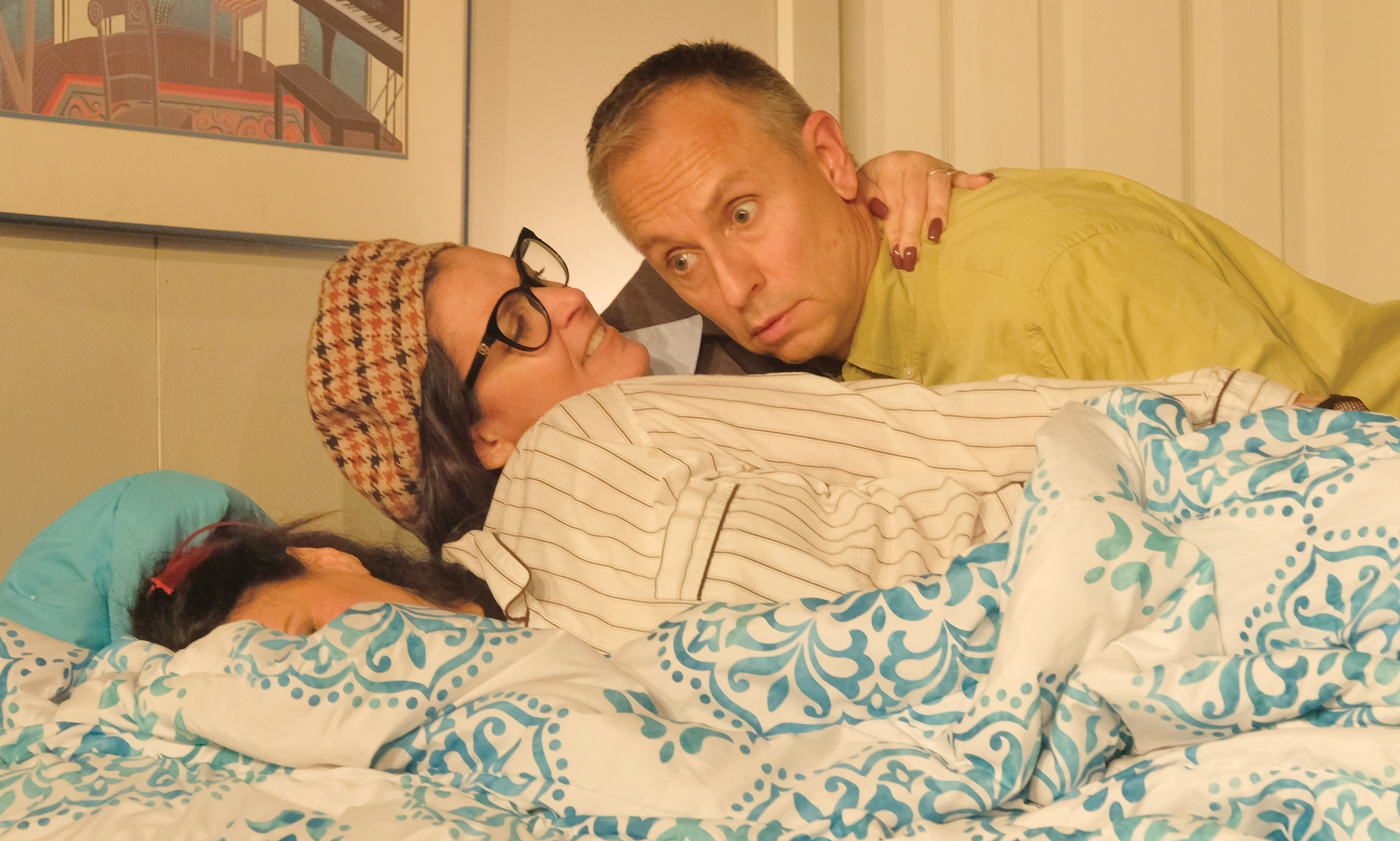 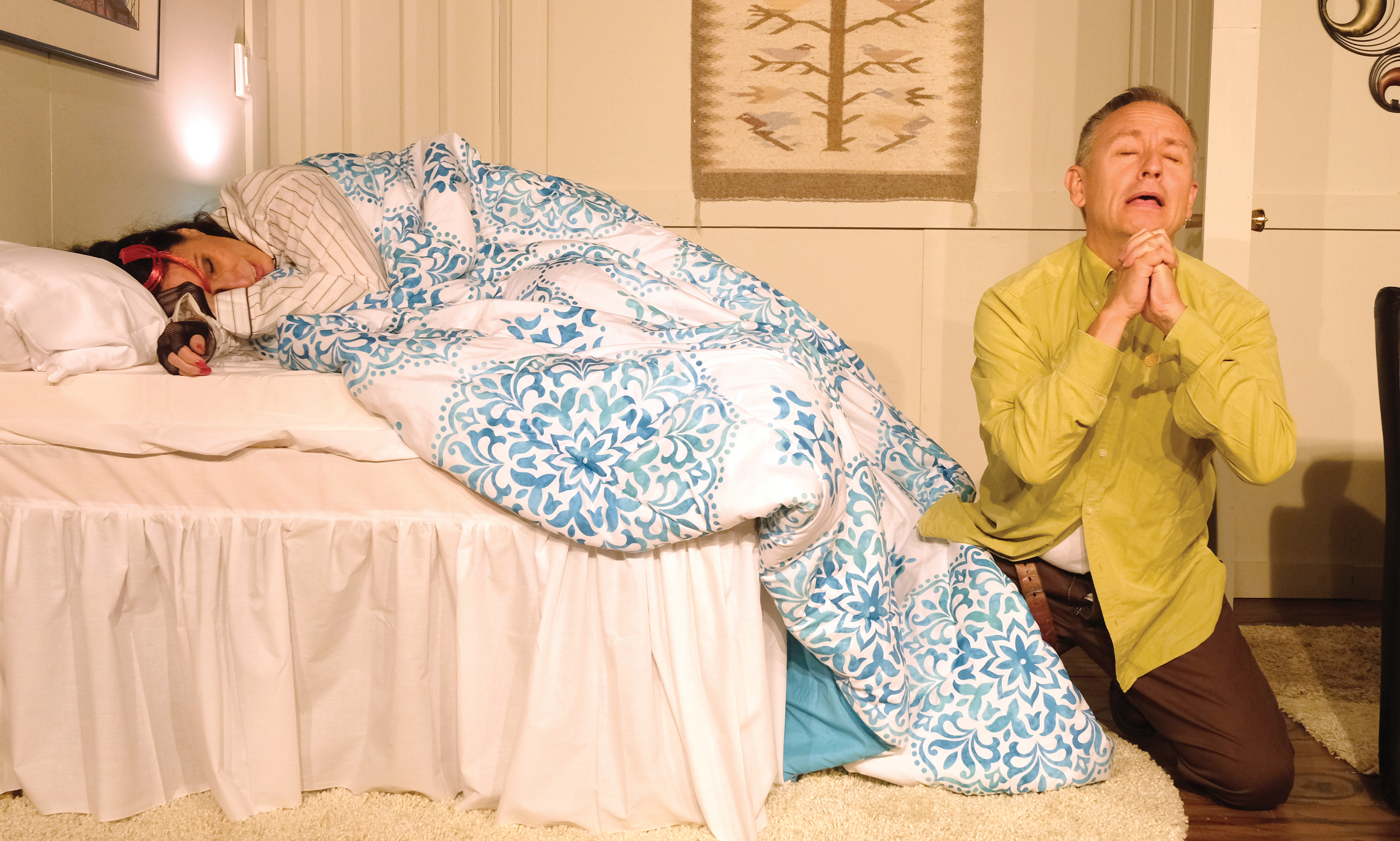 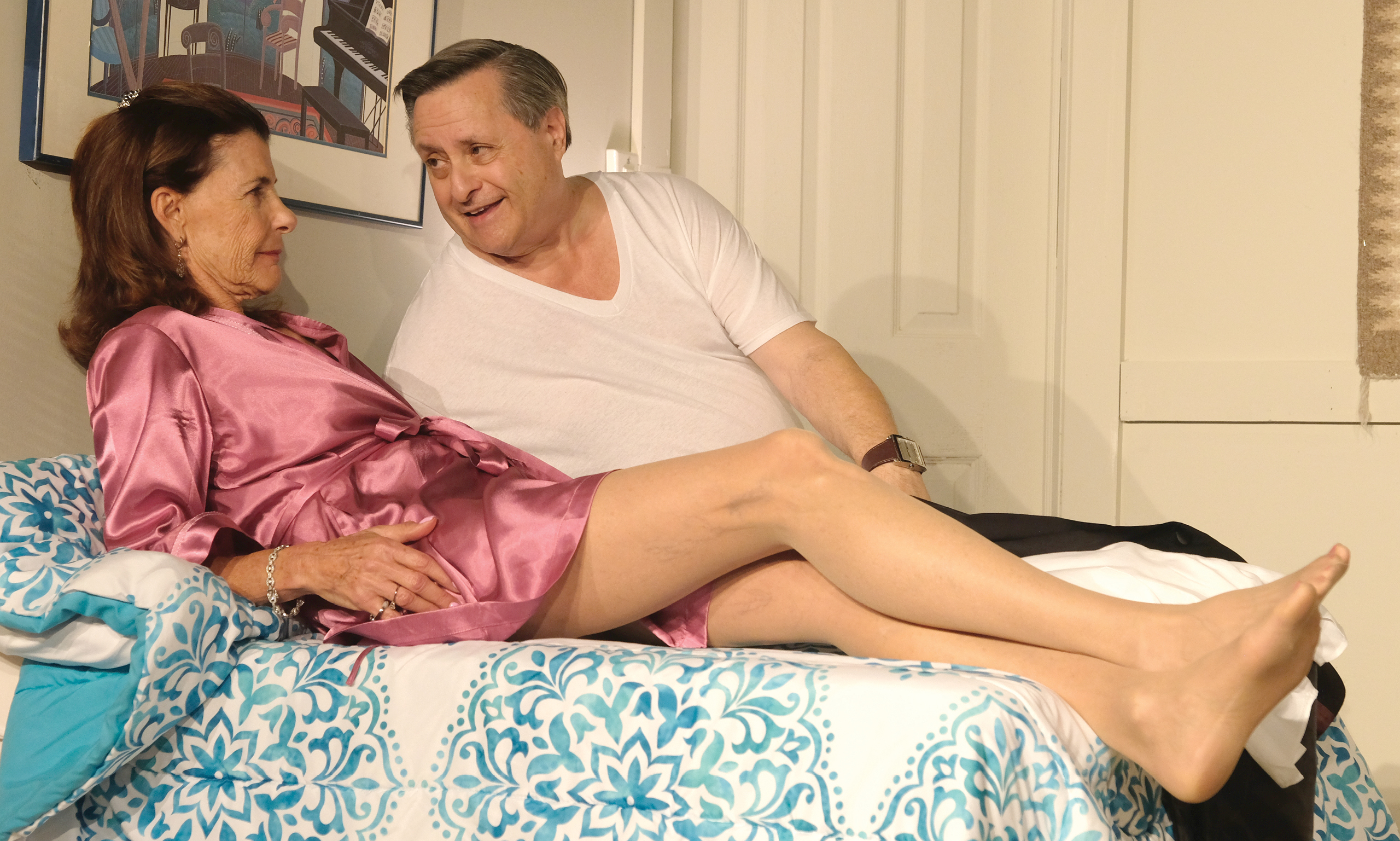 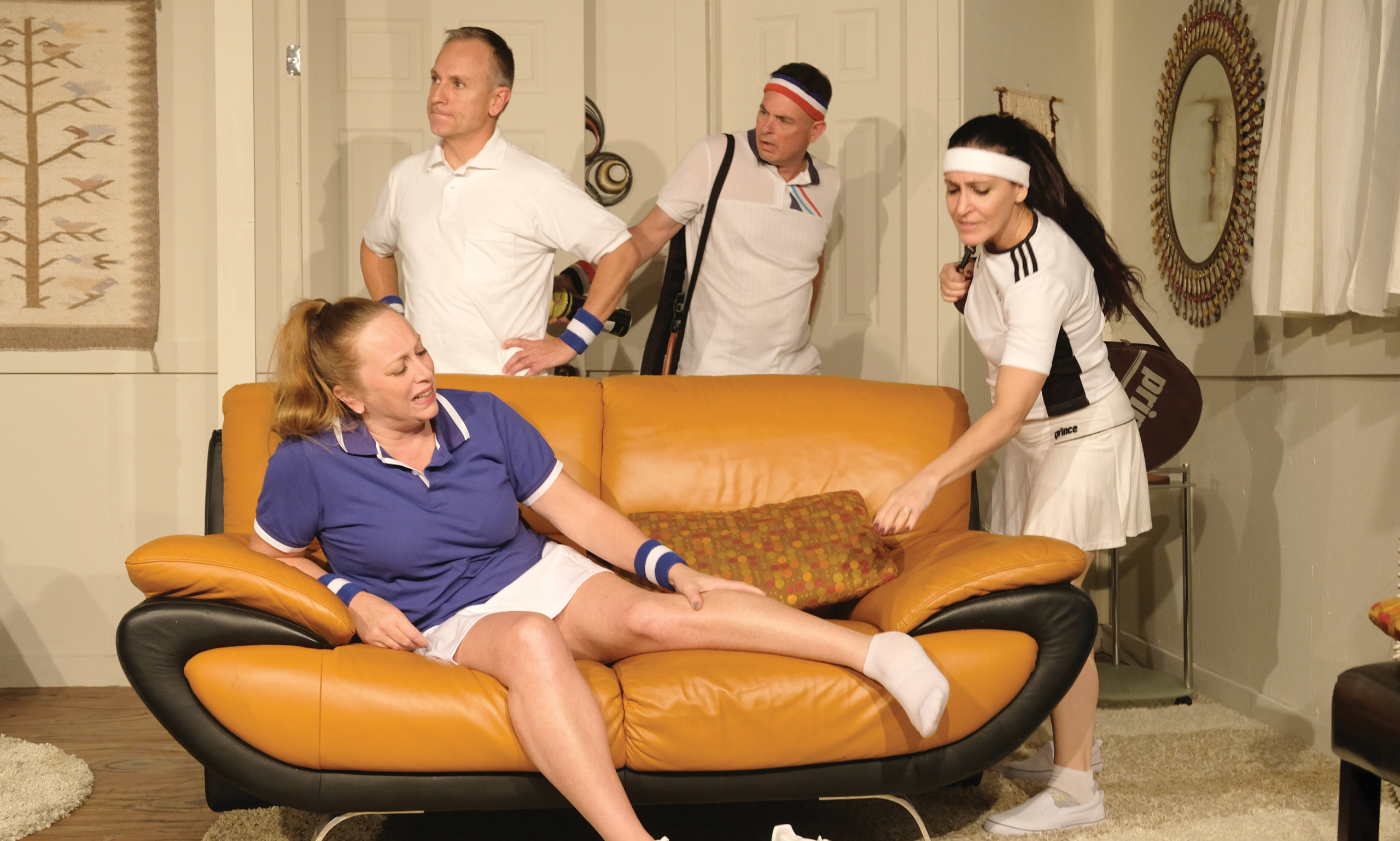 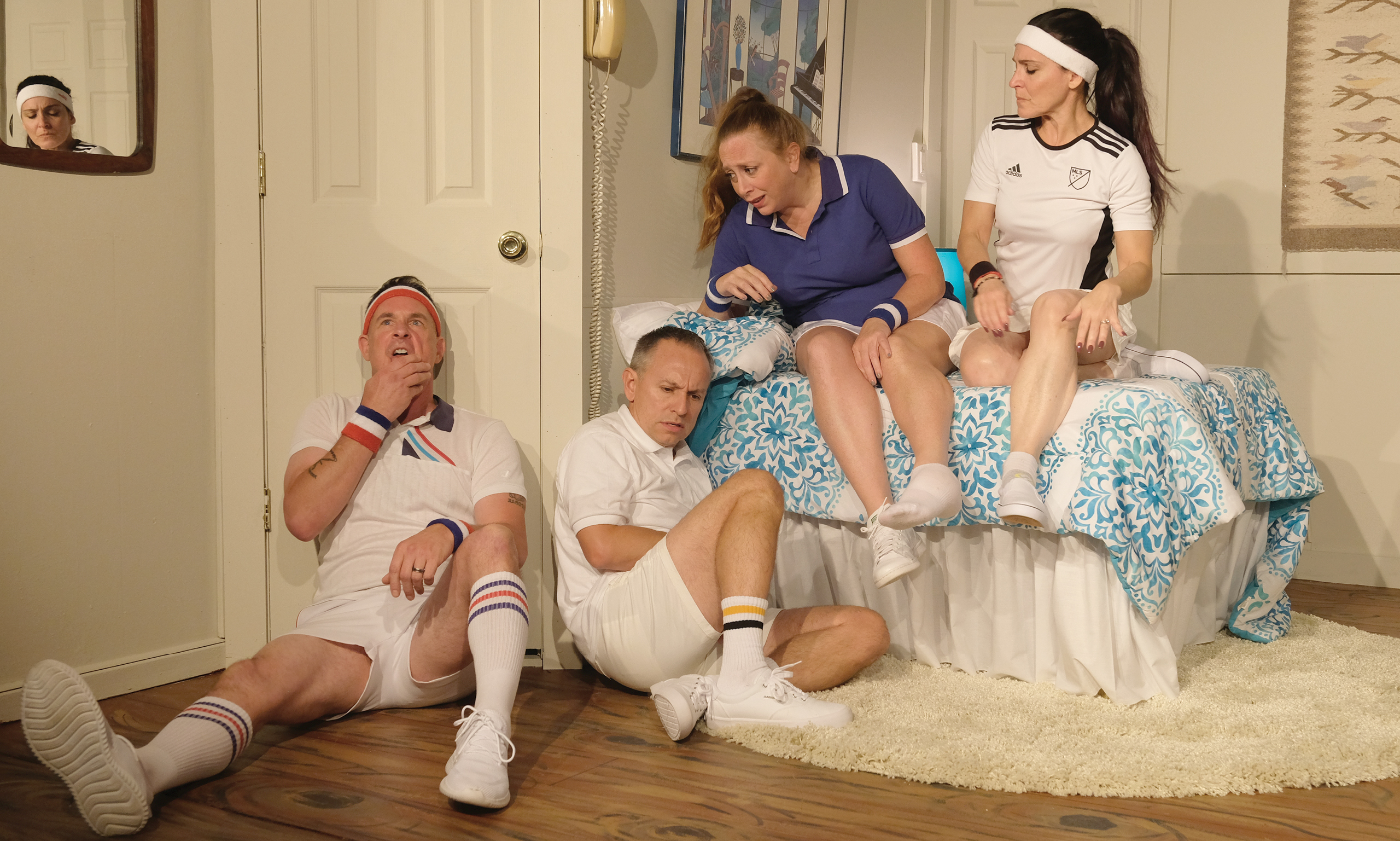 In this classic 1976 Neil Simon play, four couples arrive, in turn, from London, Philadelphia, Chicago and New York and separately inhabit a Beverly Hills hotel suite, bringing along their problems, anxieties, and comical marital dilemmas. Beverly Hills will never be the same.

Rachel is thankful for the opportunity to return to live theater with her friends at Center Players. You may remember seeing her previously as Diana in Lend Me a Tenor or Brigida in Italian Funerals and Other Festive Occasions. Rachel has been cast in a variety of roles with various local theaters over the years and counts it a privilege to learn from every new experience while doing what she loves. Some favorite credits include Steel Magnolias (M'Lynn), The Odd Couple (Florence Unger), One Flew Over the Cuckoo's Nest (Nurse Ratched), and The Laramie Project (Reggie Fluty). She would like to thank the CP Board and California Suite production team for all their hard work, Michael for bringing everyone together, and the cast for making this a "suite" experience. Special thanks to Abi for understanding Mommy's other love and her family and friends for their support. "Welcome to Suite 203-204. 🙂 Enjoy your stay!"

Vince is happy to once again be back as Center Playhouse finally reopens.  A Kean graduate, Vince was last seen onstage here in Same Time Next Year, which landed him in the window for a year and a half!  Vince also appeared on this stage in The Boys Next Door, The Dinner Party, One Flew Over The Cuckoo's Nest, and a number of staged script readings. At First Avenue Playhouse in Atlantic Highlands he was last seen in Balloon Shot, Bad Medicine and Dealer's Choice.  Enjoy the show, and welcome back!

Michael is very pleased to be returning to the Center Players stage where he has performed in Lend Me a Tenor (Max), Italian Funerals and other Festive Occasions (Big Man On Hester Street), The Emperor’s New Duds, (Emperor), Lovers and Other Strangers (Jerry), and Agatha Christie’s Murder on the Nile (William Smith).  He has appeared in numerous roles at Kelsey Theater in Mercer County, notably in A Flea in Her Ear (Etienne), Laughter on the 23rd Floor (Milt), A Chorus Line (Al) and Arsenic and Old Lace (Mortimer).  Michael‘s other regional credits include Children of Eden (Chorus) at the Washington Crossing Open Air Theatre and Passing Conversations (Lem) Off Broadway at the John Houseman Theater in New York City.  Michael sends love and thanks to his supportive friends and family, especially his Love Milena, and kids Mo, Nina, and Sarah.

Donna is thrilled to be appearing on Center Players stage playing in such a humorous role. She has always been a Neil Simon fan. She was last seen here at Center Players as Wilma in Lovers and Other Strangers. She is a single mother of 3 and acting is a hobby she truly enjoys. She continues to have a 40+ successful career in Banking and Mortgage Lending. Donna is proud to work for loanDepot as a Loan Officer in Shrewsbury. She is very excited to be working with this extremely talented Director and cast.

This is Precious’s third performance at Center Players Theater. She previously played Bea in Lovers and Other Strangers and Mama in Italian Funeral. Her film credits include Becky Roma in Who’s Jenna in 2018 and Margie in Team Marco in 2019.  She is also a professional singer / songwriter. She is delighted to be back on stage with an amazing cast and crew!

Sheldon made his acting debut just 7 years ago playing Sheriff Will Masters in Bus Stop. He quickly followed in the role of Jack Jerome, in Brighton Beach Memoirs; Sidney Nichols in California Suite; Thomas Rogers in And Then There Were None; Al Lewis in The Sunshine Boys; Howard Bevins in Picnic and Hal in Lovers and Other Strangers. He has also played George Aaronow in the play reading of Glengarry Glen Ross and Dr. Spivey in the play reading of One Flew Over The Cuckoo’s Nest. Sheldon is the President of Center Players and is also President and co-owner, with his wife Roberta, of the Leigh Insurance Agency in Freehold which is celebrating over 31 years in business. My thanks to Michael for the opportunity to reprise my role of Sidney Nichols in California Suite.

Merle is thrilled to be making her Center Players debut as Diana Nichols. Her past performances include Diana Nichols in California Suite for the Stonebridge Drama Club and Miss McCormick for another Neil Simon Play, Plaza Suite. It has been a great learning experience working with director Michael Tota and a lot of fun partnering once again with Sheldon (Sydney) Fallon. Break legs all!

David is excited to make his debut with Center Players.  He has worked with multiple community theater groups over the past 30 years.  Most recently he performed as the Stage Manager in Nine Theatrical’s production of Our Town.  David also performed in multiple productions for Lighthouse Stage Productions which include Time for a Miracle and The Search for Christmas.  David took a hiatus from the stage from 1988 - 2016 while he served his country as a United States Marine, married his hometown sweetheart, and raised their five beautiful children.  In 1988 he performed as Eugene in the South Street Players production of Brighten Beach Memoirs (where he shared a stage with his future wife) as well as Billy in On Golden Pond.  David feels blessed to join the cast and crew for this production and appreciates the opportunity to get back on the stage.  To his family, thank-you for your endless supply of love and support.

Michael is honored to be directing Center Players “Grand Reopening” show California Suite.  He most recently worked on a TV pilot called Un$uited. His latest film Color My World is in post-production. At Center Players last season, he directed Lend Me a Tenor and was seen as Dad in Italian Funerals and Other Festive Occasions. Michael has worn many hats over the past few years at Center Players.  He serves on the Artistic Board, and directed their production of “Lovers and Other Strangers”.  Other Center Players roles include: Ben The Sunshine Boys, Leo in Chapter Two, Humphrey Bogart in Play it Again Sam, Dr. Einstein in Arsenic and Old Lace,. Milt in Laughter on the 23rd Floor. Some of his other include Teach in American Buffalo, Fox in Speed the Plow Mortimer in Arsenic and Old Lace, Renfield in Dracula   and Father Mark in the Regional tour of Tony and Tina’s Wedding. He also has a supporting role in the film Who’s Jenna? Available on Amazon, Hulu, Fandango and ITunes. His short film Mis-Connected is available on DDD Entertainment on Roku.

Roberta is very pleased to be producing her 14th show for Center Players. She enjoys working as a producer, as it allows her the opportunity to work with many different directors, and to take part in the development of a show from first audition to opening night. She has also appeared on Center Playhouse stage as Helen the Maid in A Doll's House, Mrs. Rodgers in And Then There Were None, and Irma Kronkite in Picnic. Roberta serves on the Business Board of the theater as secretary. She is also Vice-President and co-owner, with her husband Sheldon, of the Leigh Insurance Agency in Freehold. She is extremely pleased to be working with such a talented director again, as well as with this awesome cast and crew. She thanks her husband Sheldon for encouraging her to join him at Center Players and for being her biggest supporter.

Denise has been involved with theatre all her life, on stage, in the pit band, and behind the scenes. She began making costumes for anime conventions and science fiction conventions, then made costumes and props for many community theatre productions including Macbeth, A Midsummer Night’s Dream, Peter Pan, and The Three Musketeers. At Center Players she was in the ensemble and worked with costumes for Bernice Garfield-Szita’s The Emperor’s New Duds, and was stage manager for Butterflies Are Free, Same Time Next Year, and Prelude to a Kiss. She is grateful for the opportunity to work with Center Players and Michael Tota , and is really enjoying working with this wonderful cast!