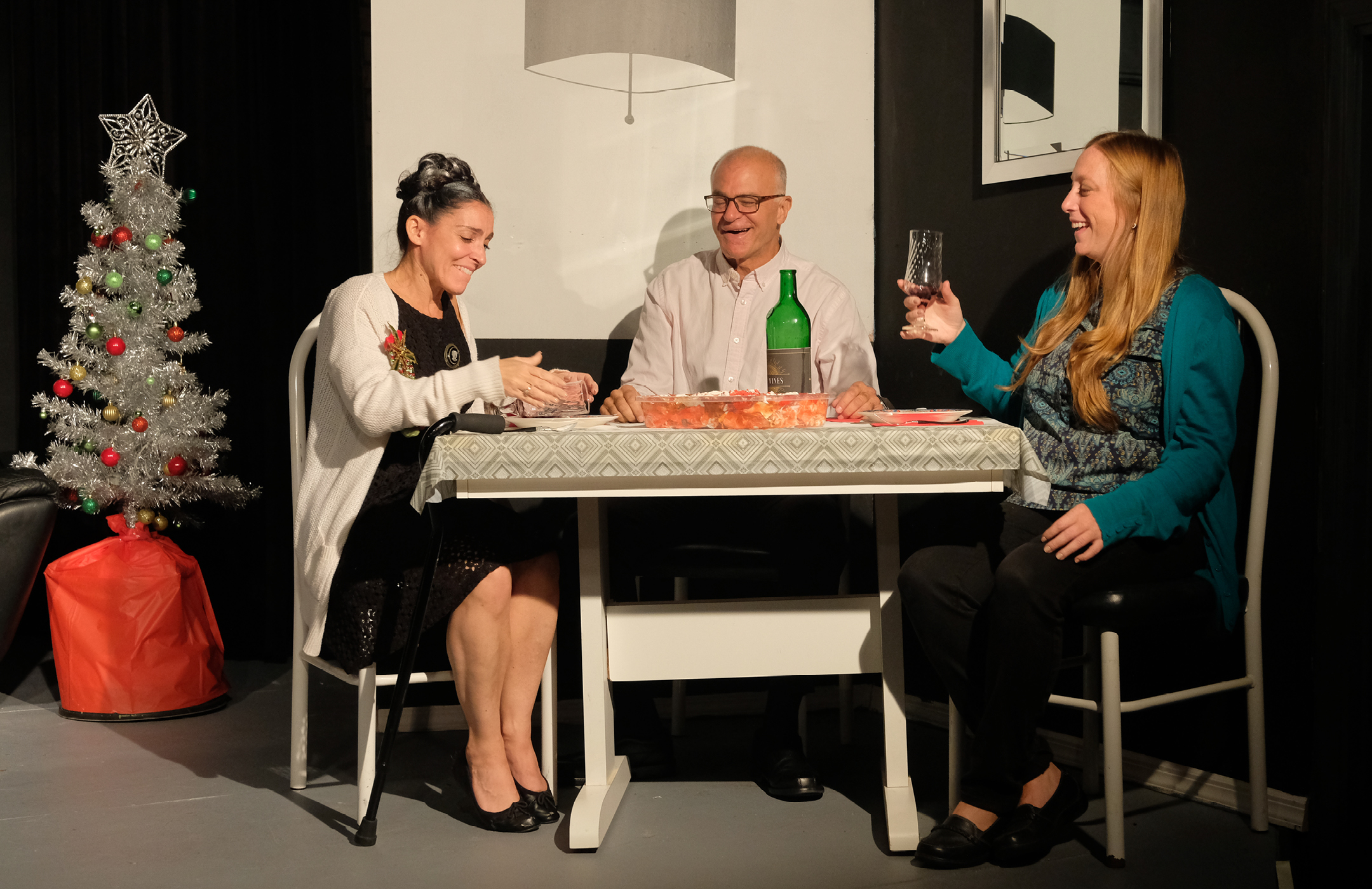 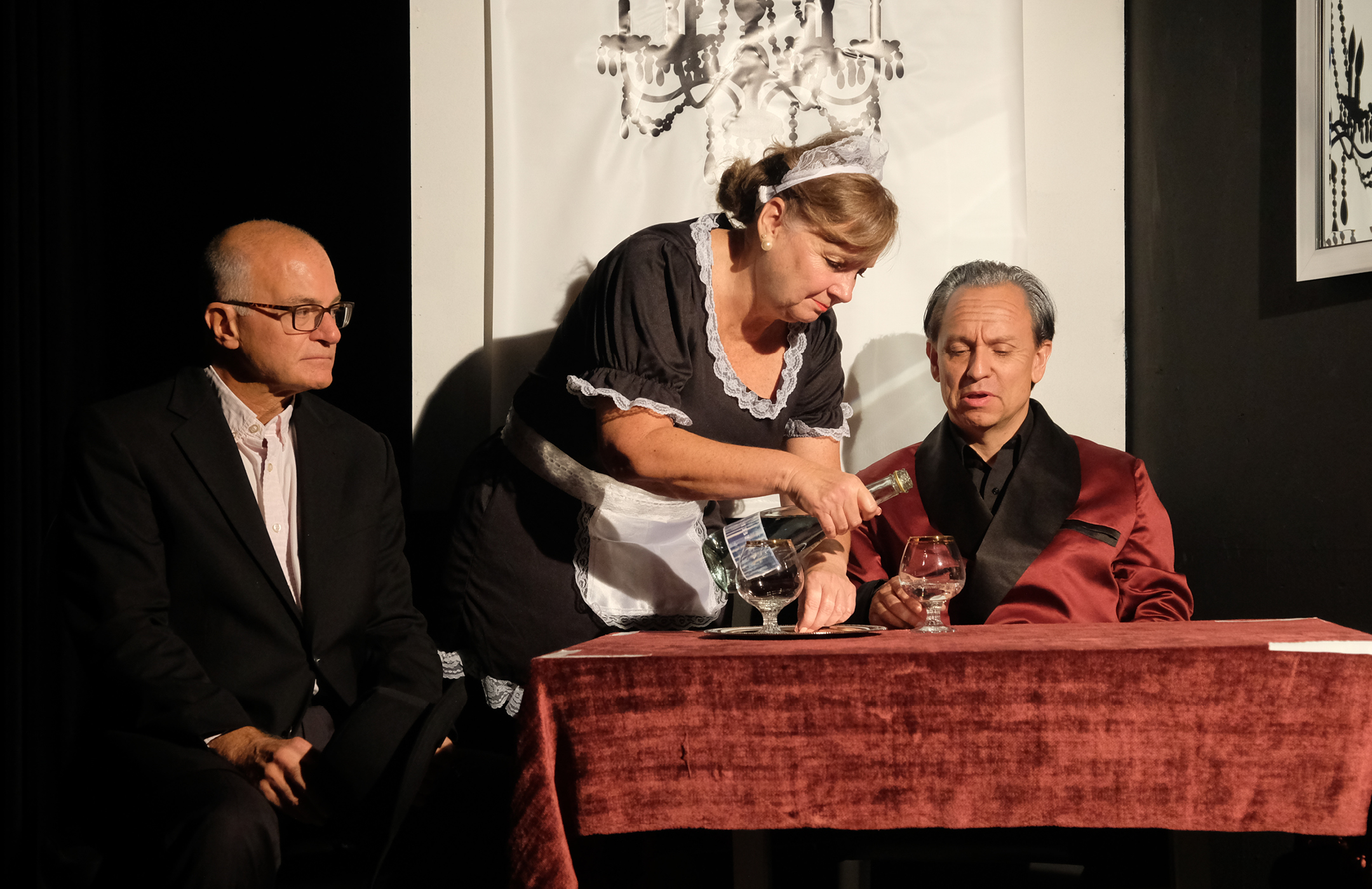 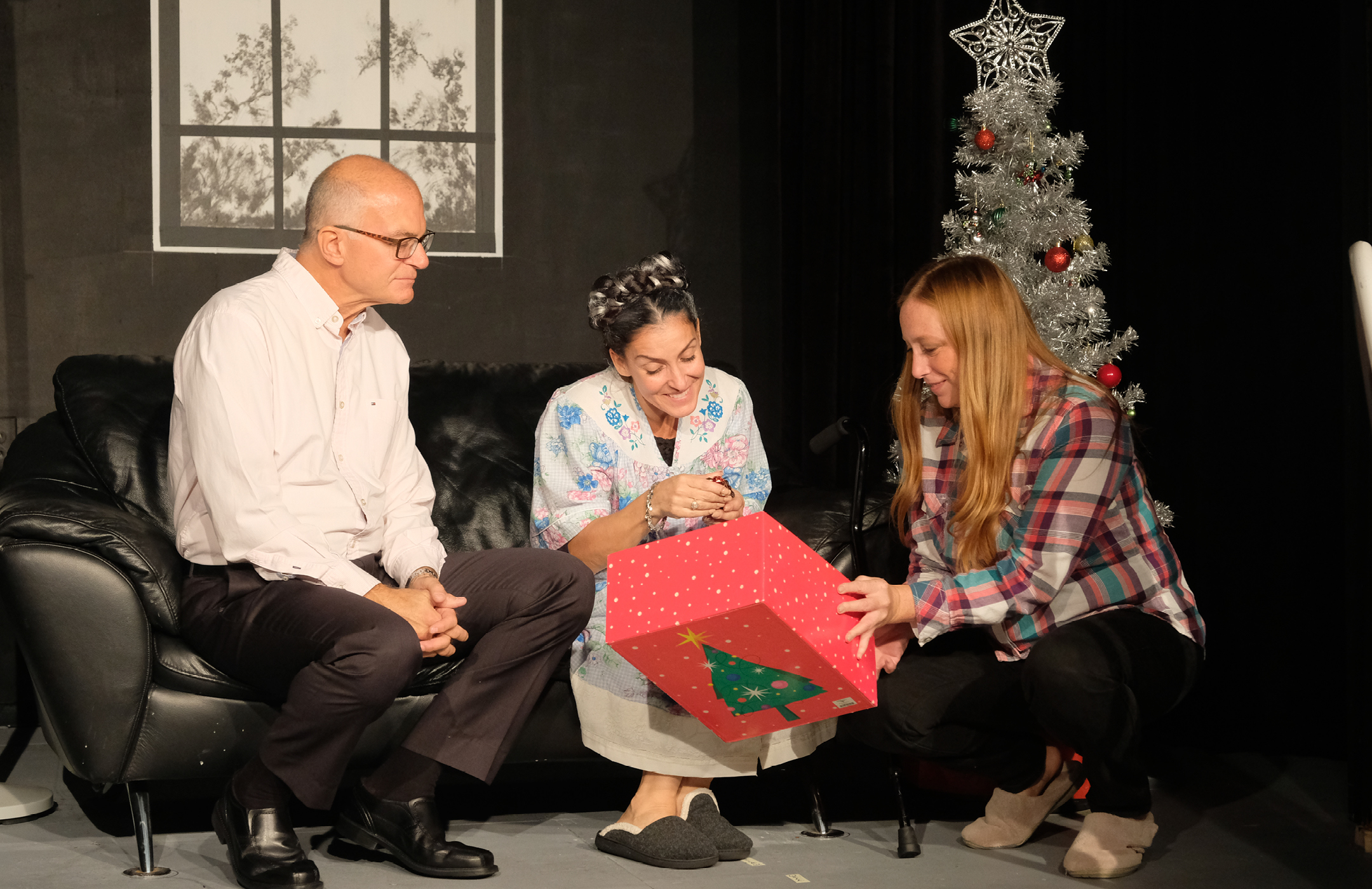 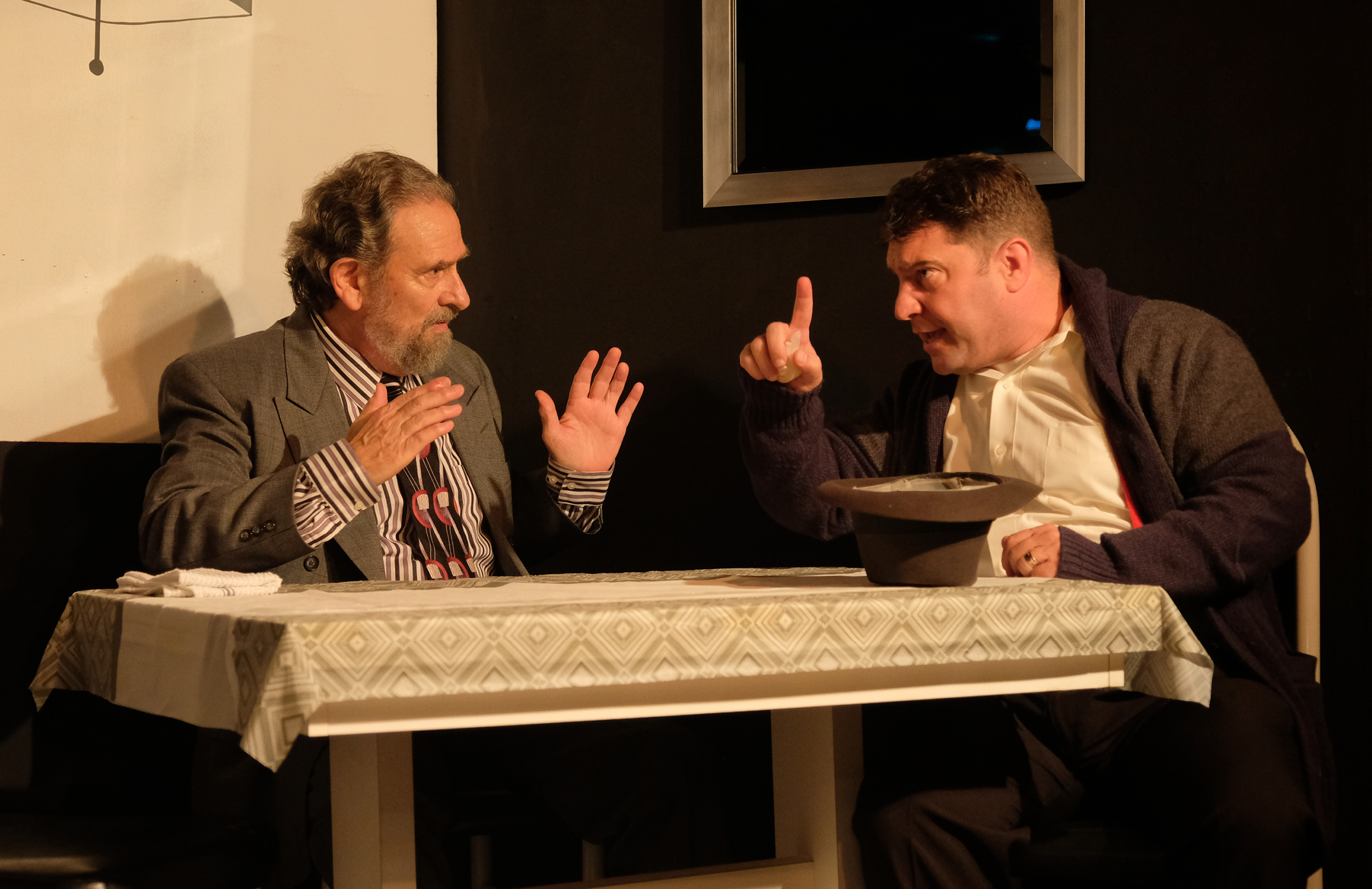 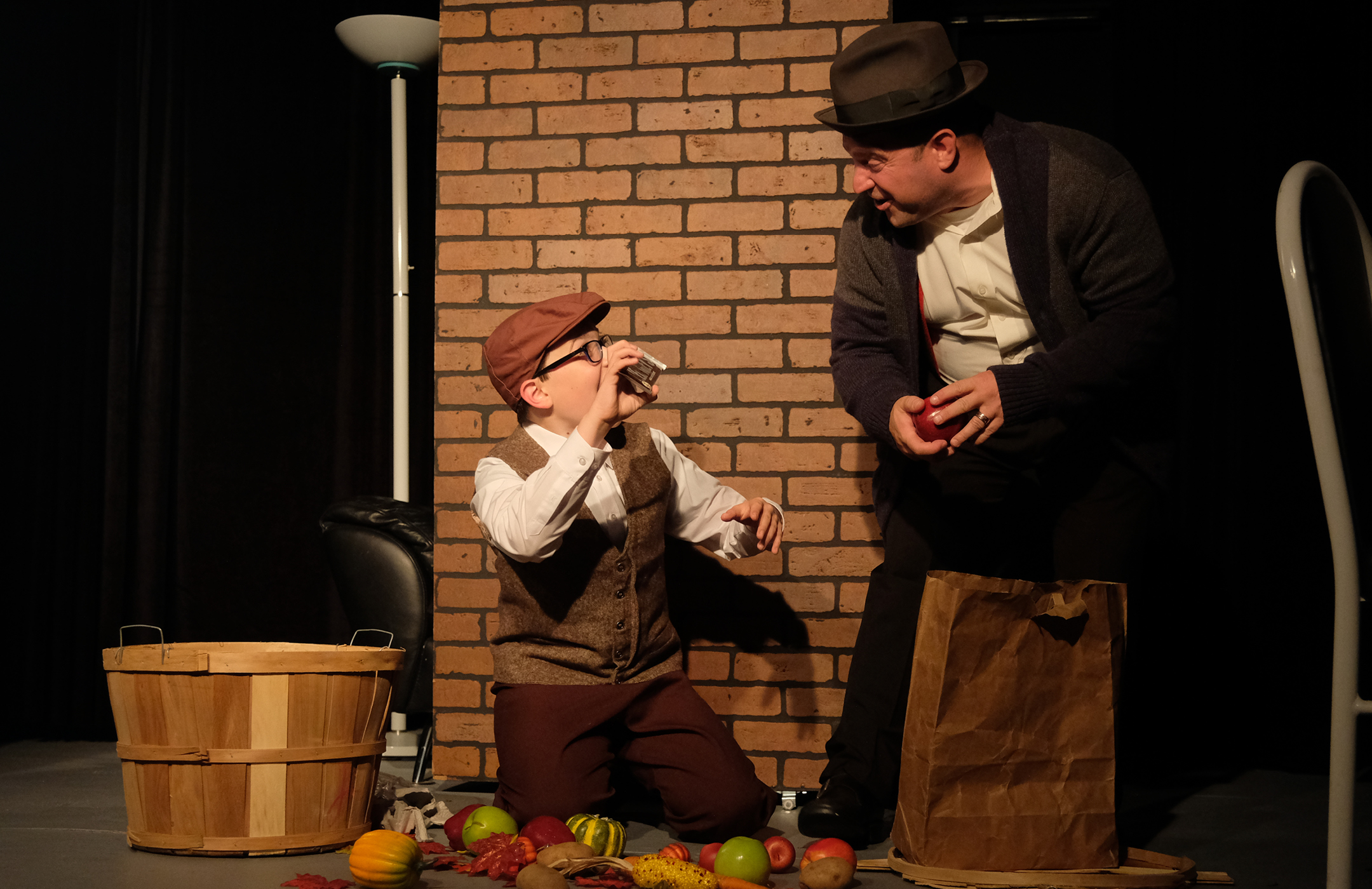 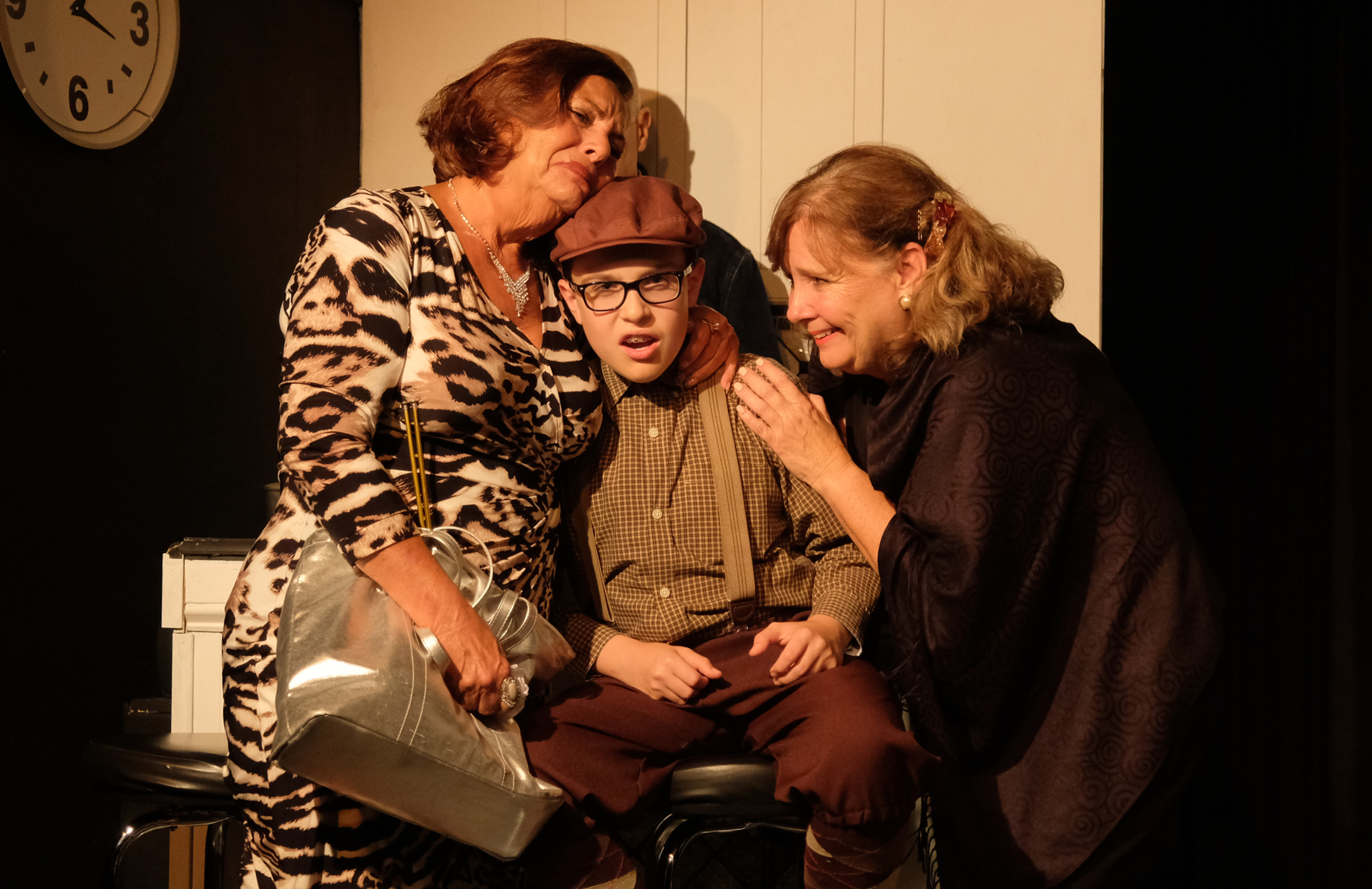 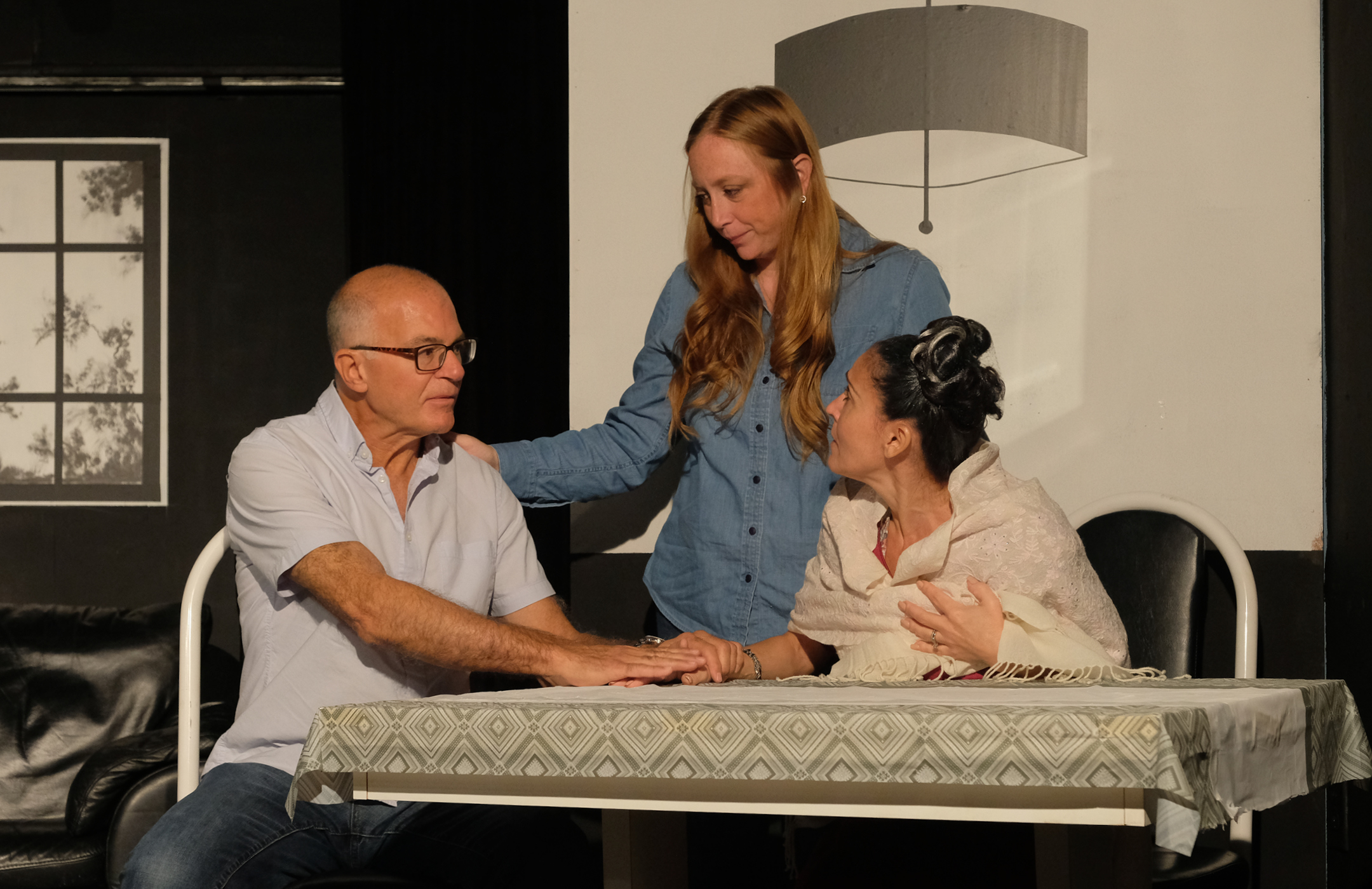 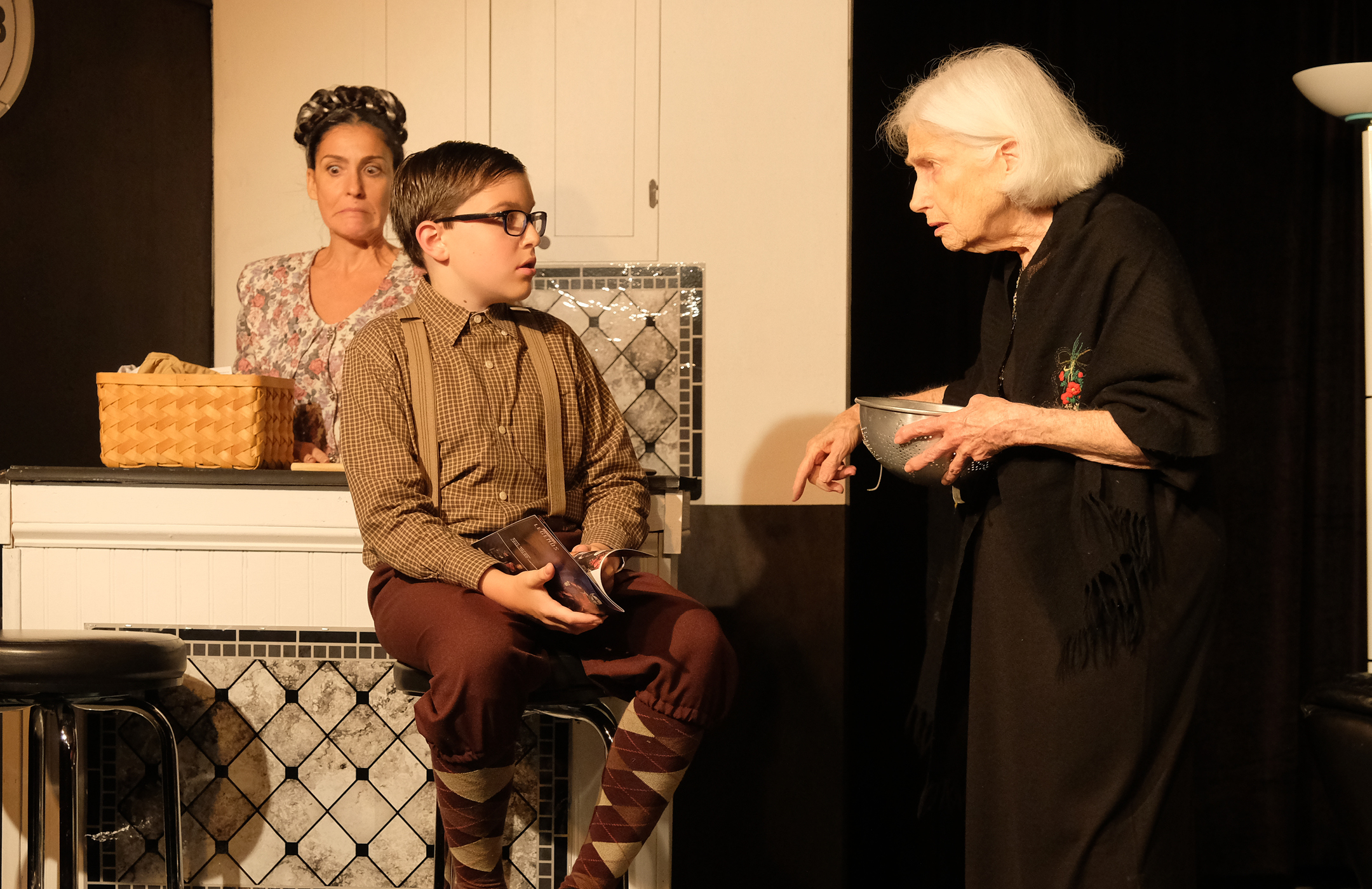 Faced with the loss of his mother to dementia, John clings to memories to postpone present family issues.  He views his life as though it is a great opera. This dramatic comedy will find answers to the present in the past.  Come join John on his journey from a young boy, with a vivid imagination, to an adult with serious decisions ahead.

Ray began acting in college on a dare from a friend, playing the lead in Shakespeare’s Macbeth In New York. Ray studied acting at the Neighborhood Playhouse and appeared in several Off-Off Broadway productions including, A Midsummer Night’s Dream and The Marathon. At The New Jersey Shakespeare Festival, Ray appeared as Bernardo in Hamlet, opposite Eric Booth of the famous Booth acting family.  Since 2008, Ray has appeared in many Community Theatre productions including: Driving Miss Daisy, The Odd Couple – Female Version, 20th Century, Twelve Angry Men, I’m Not Rappaport, The Passion of Dracula, Extremities, The Diary of Anne Frank, All My Sons, Lovers & Other Strangers and One Flew Over the Cuckoo’s Nest. Ray recently made his film debut in Team Marco, due to be released in 2019. Ray is thrilled to be back at Center Players with such a talented cast, director and production crew. Ray is also an award winning artist. You can check out his work at: www.raysammak.com.

Jack is a 7th grader at Frank Antonides School in West Long Branch. Jack is thrilled to be making his debut with Center Players. He has performed with several Production Companies in Monmouth County including Count Basie Performing Arts Academy, Axelrod Performing Arts Center ,  Phoenix Productions, Algonquin Arts, The Premier Theatre Company, Spring Lake Theatre Company, Shore Players, and Seashore Theatre Camp. Shows include: The Little Mermaid (Flounder), Peter Pan, Jr. (Hook), Ragtime (Edgar), A Christmas Story Musical (Ralphie), Wizard of Oz, Jr. (Oz), The Little Mermaid, Jr.(Sebastian), The Music Man (Winthrop Paroo), A Christmas Carol (Tiny Tim), You’re A Good Man Charlie Brown (Schroeder), Peter Pan (Michael Darling), Evita (Childrens ensemble) , Mary Poppins (Michael Banks), Gypsy (Newsboy) Seussical the Musical (Who), The Lion King (Young Simba), and Cinderella (Jaq). He would like to thank Ray Parnese  and the entire cast and crew  for welcoming him into this production. He would like to send out special thanks to his family and friends for their love and support.

Rachel is excited to take the stage at Center Players and thankful for the opportunity to be part of this festive occasion. Rachel is entering her eighteenth year in the field of education and currently teaches Language Arts to middle school students. Prior to that, she spent many years teaching high school English and Theater, where she also directed over 30 shows including Our Town, Godspell, and Little Shop of Horrors. Favorite acting credits include Female Odd Couple (Florence Unger), One Flew Over the Cuckoo’s Nest (Nurse Ratched), and The Laramie Project (Reggie Fluty). Rachel is also proud to be co-founder and vice president of Lighthouse Stage Productions where she has co-written and directed four original musicals. Many thanks to the board and production team for their hard work and kindness and much love to her family and friends for their continued support, especially Tim and Abi.

Precious is thrilled to return to the Center Player’s stage for the second time.  She last appeared in the role of Bea in Lovers and Other Strangers. Film credits include Becky Roma, opposite Vincent Pastore  in “Who’s Jenna…?”, and most recently  in Team Marco which is being released at the end of this year. She is a professional singer /songwriter and a vocal coach. A special thank you to Raymond Parnese for the opportunity for this role. And all my love to my family: Neil, Alexandria  , Damian and Mammarel! Thank you for your constant love and support.

Susan is delighted to return to Center Players where she enjoyed the role of a lifetime as Daisy in Driving Miss Daisy. Since then she’s been Mrs. Dubose in To Kill a Mockingbird at Kelsey Theatre, Goody Nurse in The Crucible at Playhouse 22 and appeared in several readings of original plays. She has just ppeared The Vagina Monologues at The Cranford Drama Club. When not on stage, Susan enjoys playing tennis, tap dancing, making music, reading and knitting.

Cathy is happy to be making her first appearance with Center Players.   She has spent the better part of the last twenty years taking her four children to auditions, sewing costumes, painting sets, selling concessions and running lines. Her children then encouraged her to audition for her first principal role as Ethel Banks in Neil Simon’s Barefoot in the Partk for which she was honored with a Perry Award nomination, proving that you are never too old to pursue a dream, or try something new.  Cathy is the Chief Financial Officer at Disability Rights New Jersey.  She is very grateful for the opportunity to be a part of this talented cast and for the undying support of her husband and family.  Now “That’s Amore”!

Don is a resident of Verona, New Jersey, and will be making his first appearance with the Center Players.  He teaches English at the Thomas Jefferson Arts Academy in Elizabeth, New Jersey and this is where he had his first acting experiences.  Performing with the Jefferson Liberty Players, he has acted in performances of, The Importance of being Earnest, A Midsummer Night’s Dream, You Can’t Take it with You, West Side Story, and Mother Courage.

He is eternally grateful to Ray Parnese and the Center Players organization for giving him this opportunity and is thrilled to be working with a brilliant, talented cast of actors.

Most recently, Michael directed Center Players production of “Lovers and Other Strangers”.  He is happy to once again be working with Ray.  He was last seen as Ben in Center Players production of The Sunshine Boys also directed by Ray.  Other roles include: Leo in Chapter Two.  Humphrey Bogart in Play it Again Sam, Father Mark in the Regional tour of Tony and Tina’s Wedding at Buona Sera in Red Bank, Dr. Einstein in  Arsenic and Old Lace. Milt in Laughter on the 23rd Floor,  Teach in American Buffalo, Mortimer in Arsenic and Old Lace, Renfield in Dracula as well as various murder mystery shows in the tri state area.   He has a supporting role in the film Who’s Jenna? Available on Amazon, Hulu, Fandango and ITunes.

Coming from a background of Sales Training and Motivational Speaking, the itch for the stage overtook me. It was more than 50 years between my first, and only appearance at that time, and then participating in 12 plays over the last 4 years. Variety was indeed the spice of life, based on the diversity of characters I have been privileged to portray. Ranging from Lord Capulet in Romeo and Juliet, to a comedic role as King Sextius in Once Upon a Mattress.  Working with everyone at Center Players has been a delightful and enriching experience for me.  I am continuing with my original programming Mind Opening Presentations  written and presented by myself. Dealing with the world around us; humorous… informative… thought provoking entertainment.

Kathy is thrilled to be making a return to Center Players after  playing the role of the registered nurse in the Sunshine Boys. She has appeared in numerous plays at Rowan University where she received her degree in Speech/Theater. In addition, she has performed at the Manhattan Repertory Theater in New York City and at the Strand in Lakewood. Other shows that she has performed in include Lend Me A Tenor, Rumors, Gypsy, Musical Comedy Murders of 1940, Over The River and Through the Woods and You Can’t Take It With You. Her directorial credits include You’re a Good Man Charlie Brown and A Disney Spectacular at Hamilton Middle School.  She is grateful to all her family and friends who have supported her through the years.

Candy is excited to be back on the Center Players stage.  Prior performances at Center Players include The Rainmaker and And Then There Were None.  Favorite past roles have included the title role of Laura, Candy Starr in One Flew Over The Cuckoo’s Nest and Sylvia in the original play, Not Curing Cancer. Candy thanks Harrison and the kitties for their unending support and encouragement in all things. To the very talented cast and crew – break a leg!

Kristen is happy to return for her second Center Players production after appearing in Picnic as Madge last season. She is an alumna of the competitive Two River Theater “Metro Scholars” program. Recently, she performed in the “Summerfest” theater festival at the Hudson Guild Theater in NYC.  She also had the pleasure of working with Alliance Repertory Theatre, an associate member of NJ Theatre Alliance, both in an onstage and offstage capacity in recent months. Lots of love to her cast, crew, friends, and family for their support.

John has performed in South Pacific’s Nothing Like a  Dame. In the 70’s he traveled to numerous Eastern European countries as part of a barbershop group called The Jades. He is well known in the karaoke circuit for his renditions of Old Show Tunes, Bowie and Pearl Jam songs. His Favorite hobby is writing and directing video shorts. He was employed at Walgreens for 31 years, and is now a realtor. ” I have attended many plays at Center Players and now I am very honored to be a part of one”.

Michael is very pleased to be returning to the Center Players stage where he has performed in Lovers and Other Strangers (Jerry), Mostly True Things (Storyteller) and Agatha Christie’s Murder on the Nile (William Smith). He has appeared in numerous roles at Kelsey Theater in Mercer County, notably in A Flea in Her Ear (Etienne), Laughter on the 23rd Floor (Milt), A Chorus Line (Al) and Arsenic and Old Lace (Mortimer).  Michael‘s other regional credits include Children of Eden (Chorus) at the Washington Crossing Open Air Theatre and Passing Conversations (Lem) Off Broadway at the John Houseman Theater in New York City.  Michael sends love and thanks to his wonderful friends and family, for all their support, especially his sweetheart Milena and his lovely children Mo and Nina, who inspire him every day.

This is Ray’s third time as director at Center Players. Last season, Ray directed and designed the set for Picnic for which he received three NJACT Perry Awards – Outstanding Production of a Play, Outstanding Scenic Design of a Play, and Outstanding Properties of a Play. The previous year, he directed, and designed the set for The Sunshine Boys for which he received a NJACT Perry Award nomination for his set design. Ray is Center Players’ Assistant Artistic Director, as well as serving on both the Artistic and Business boards for the theater. He has designed numerous sets for shows here at Center Players.  He is a member of NJACT as a reviewer of community theater plays throughout New Jersey. Ray also produces, directs and designs sets for many shows at The Stonebridge Community where he and his wife Ro live.

“Working with such a talented ensemble of actors, technicians and staff has made my job as director much smoother and rewarding. I hope you enjoy our performance of Italian Funerals and Other Festive Occasions”