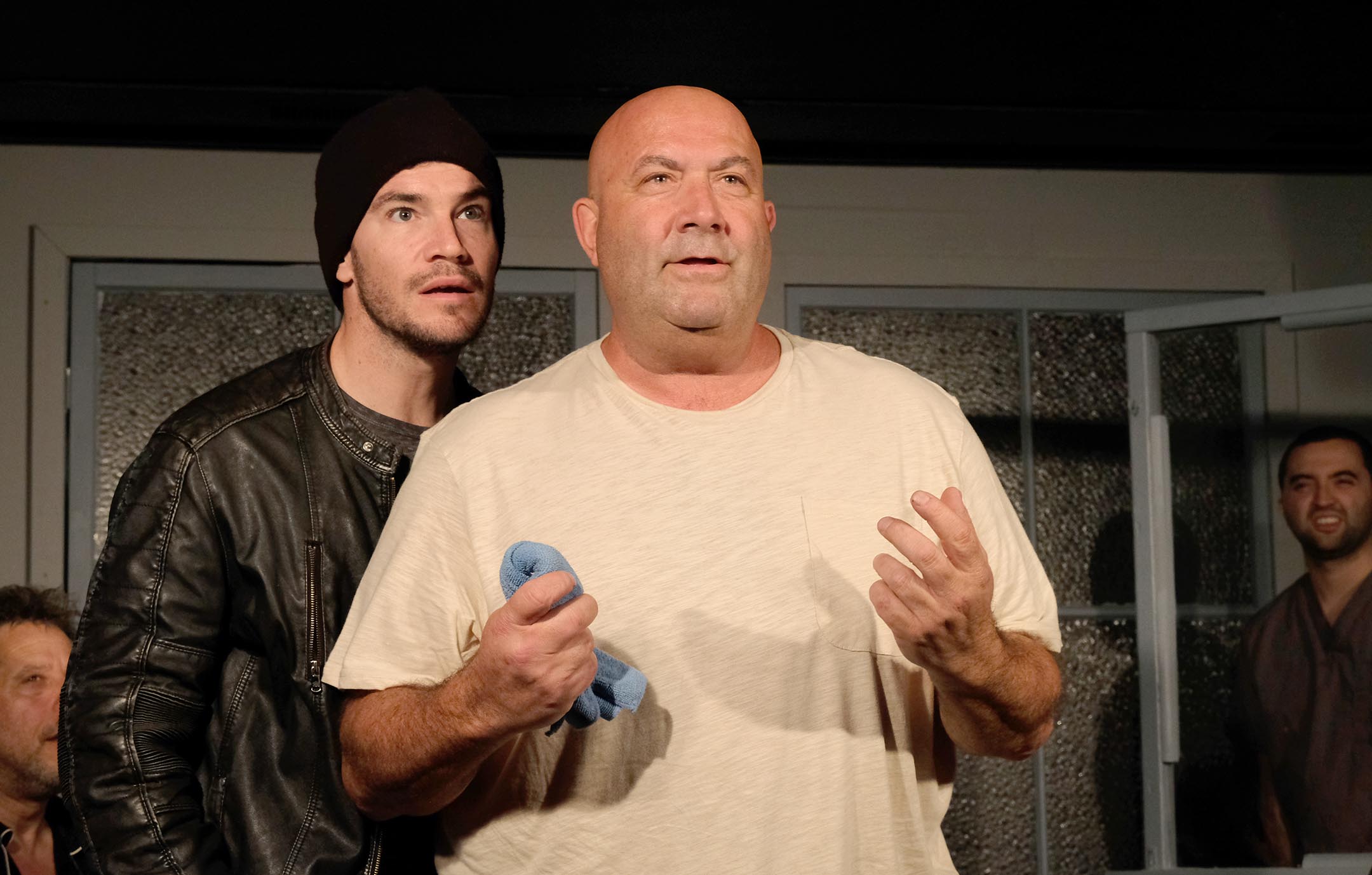 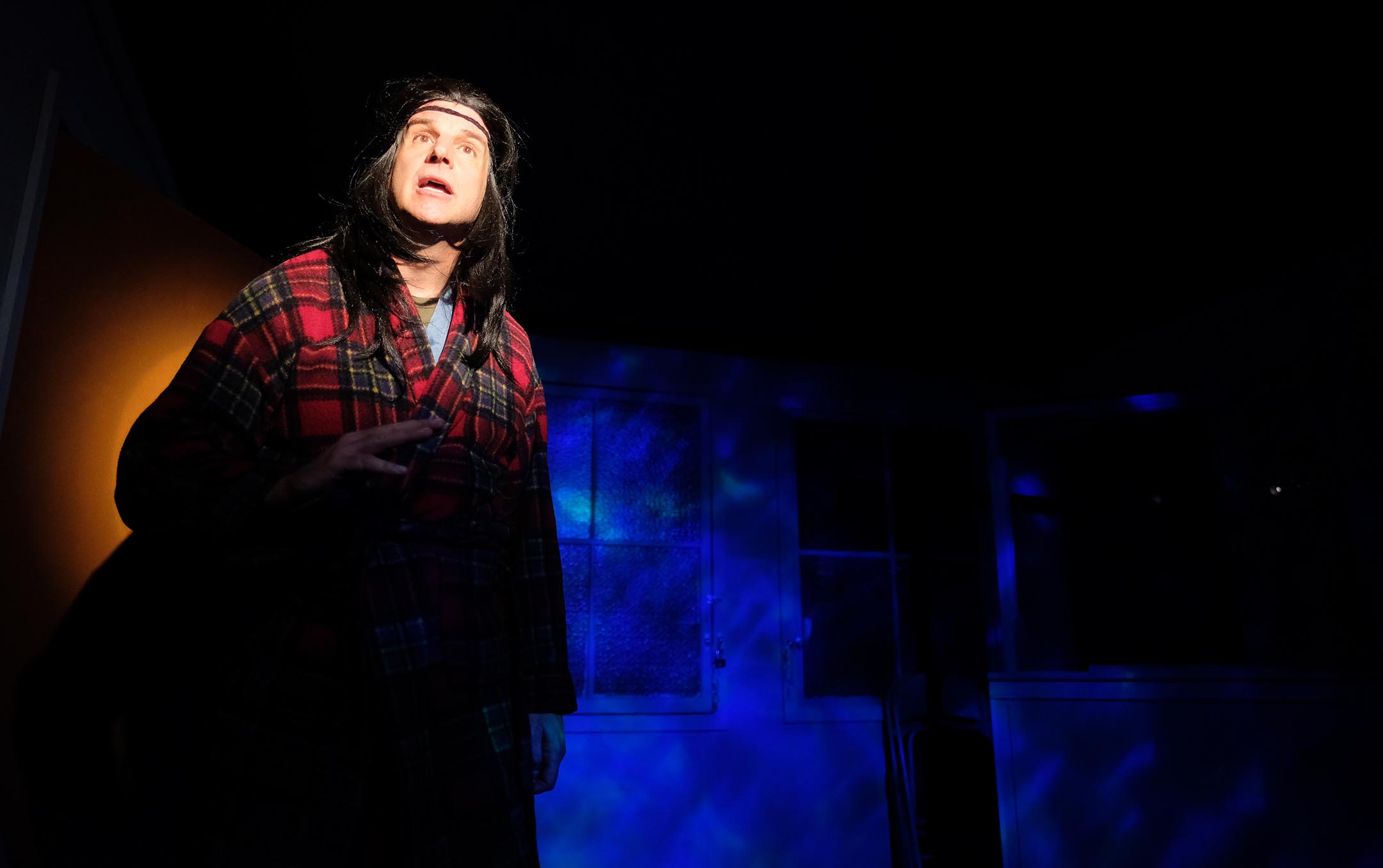 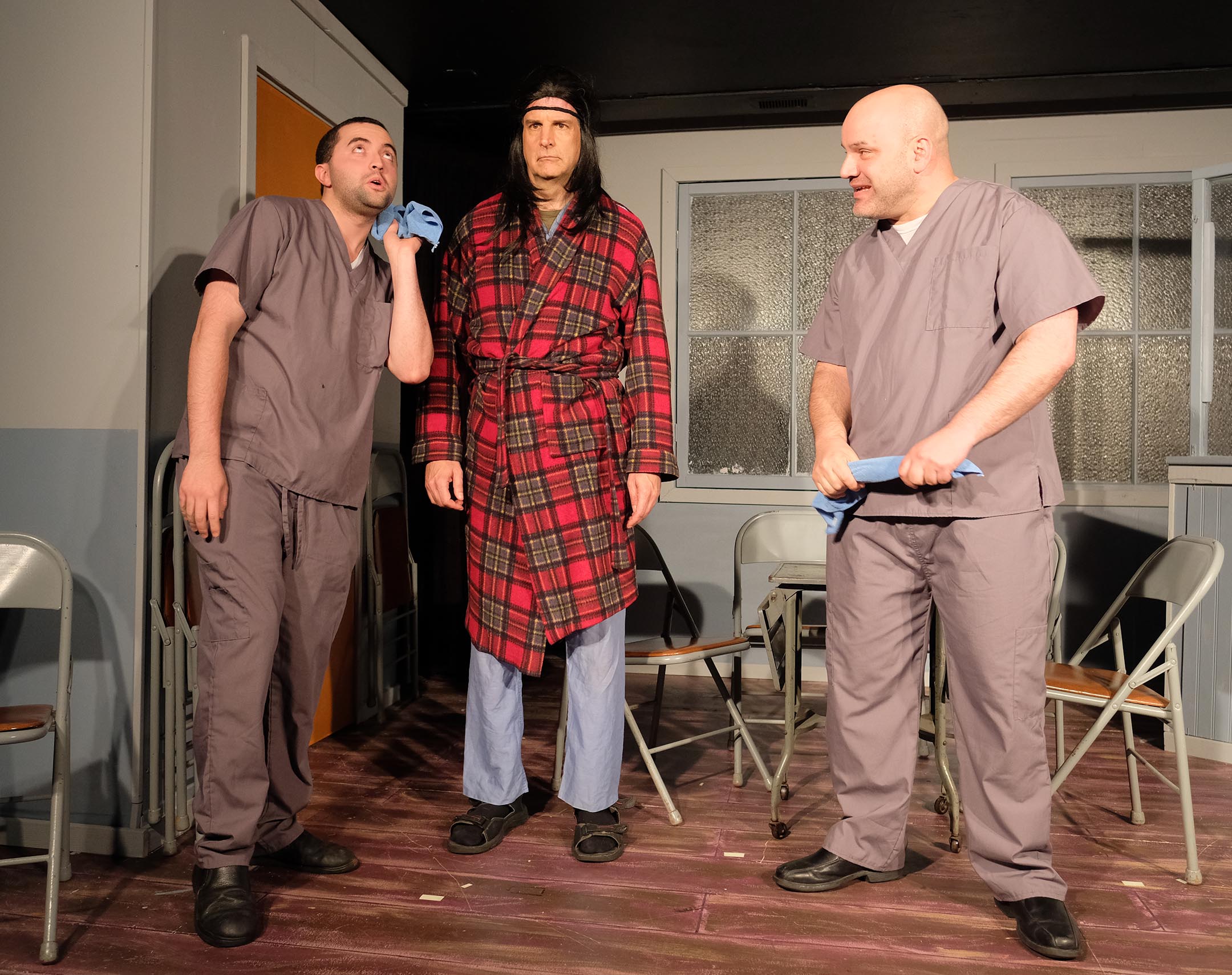 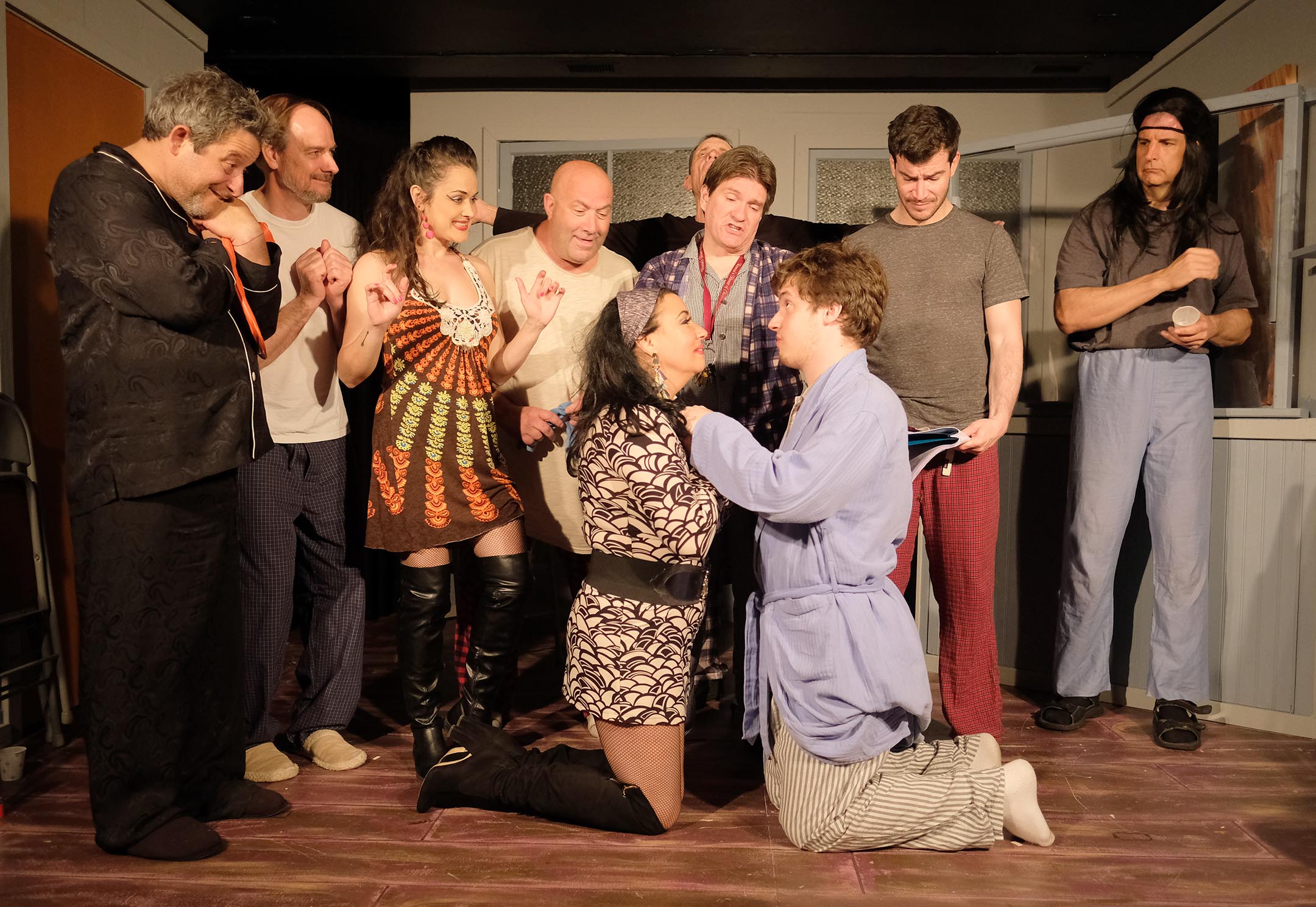 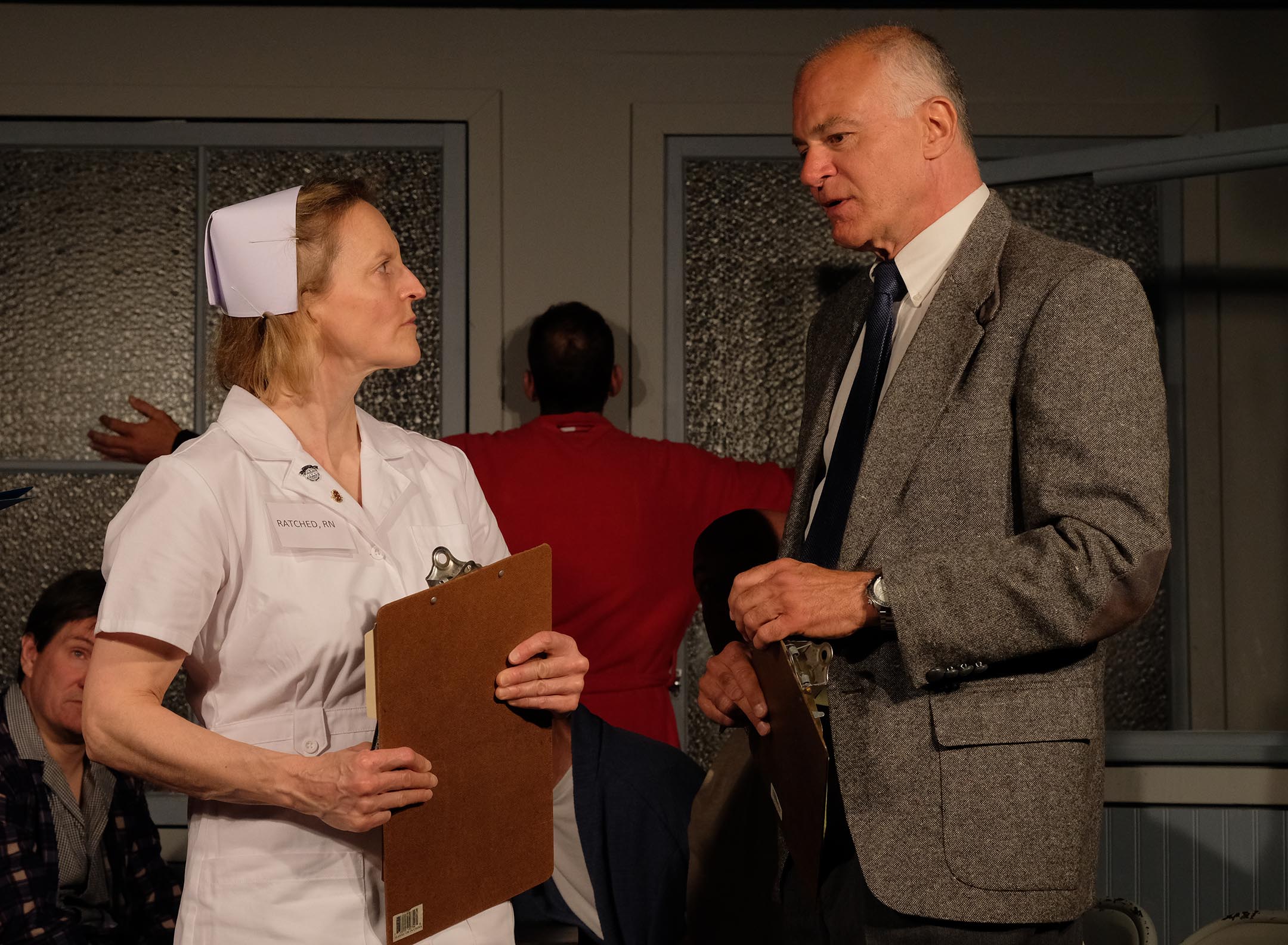 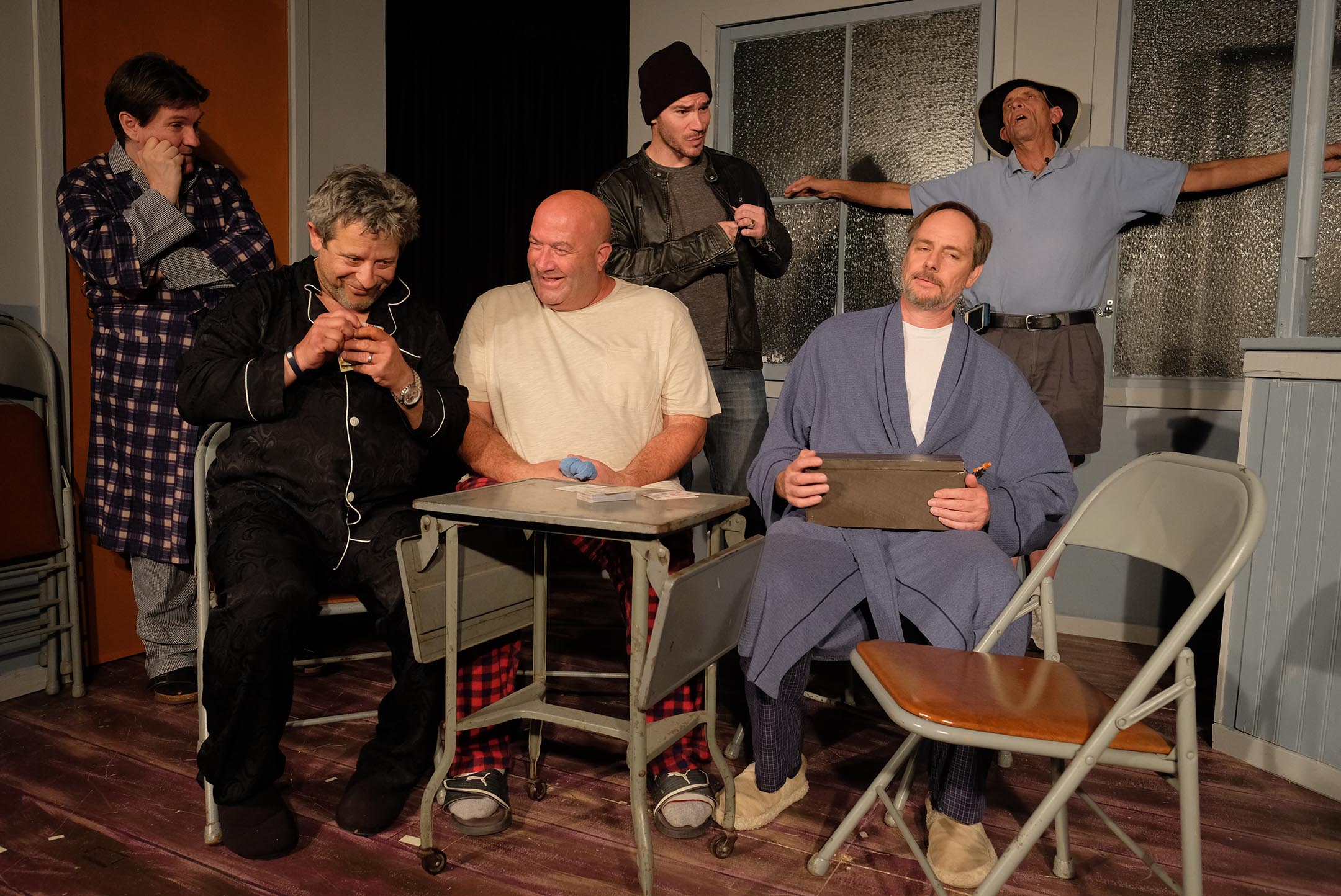 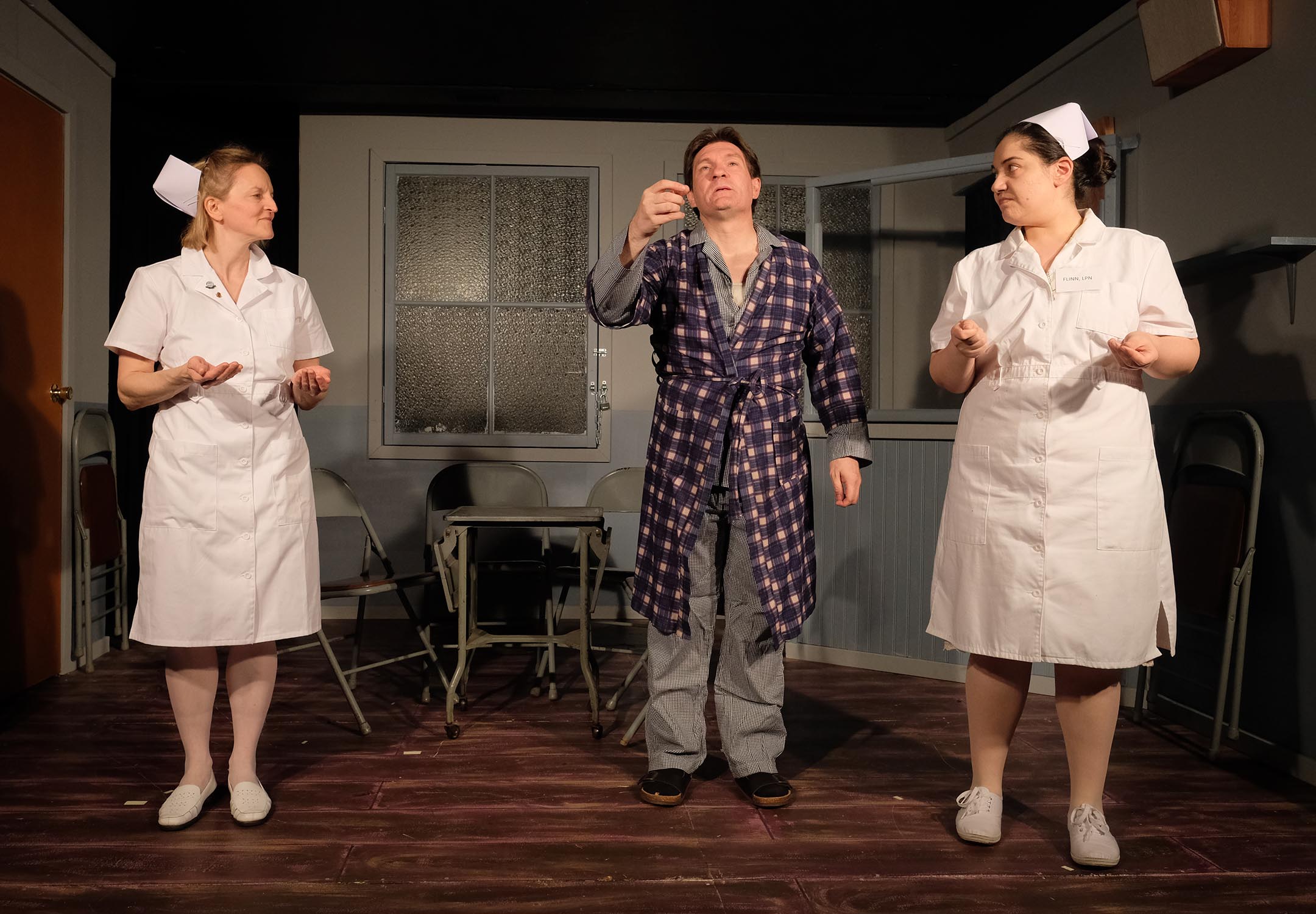 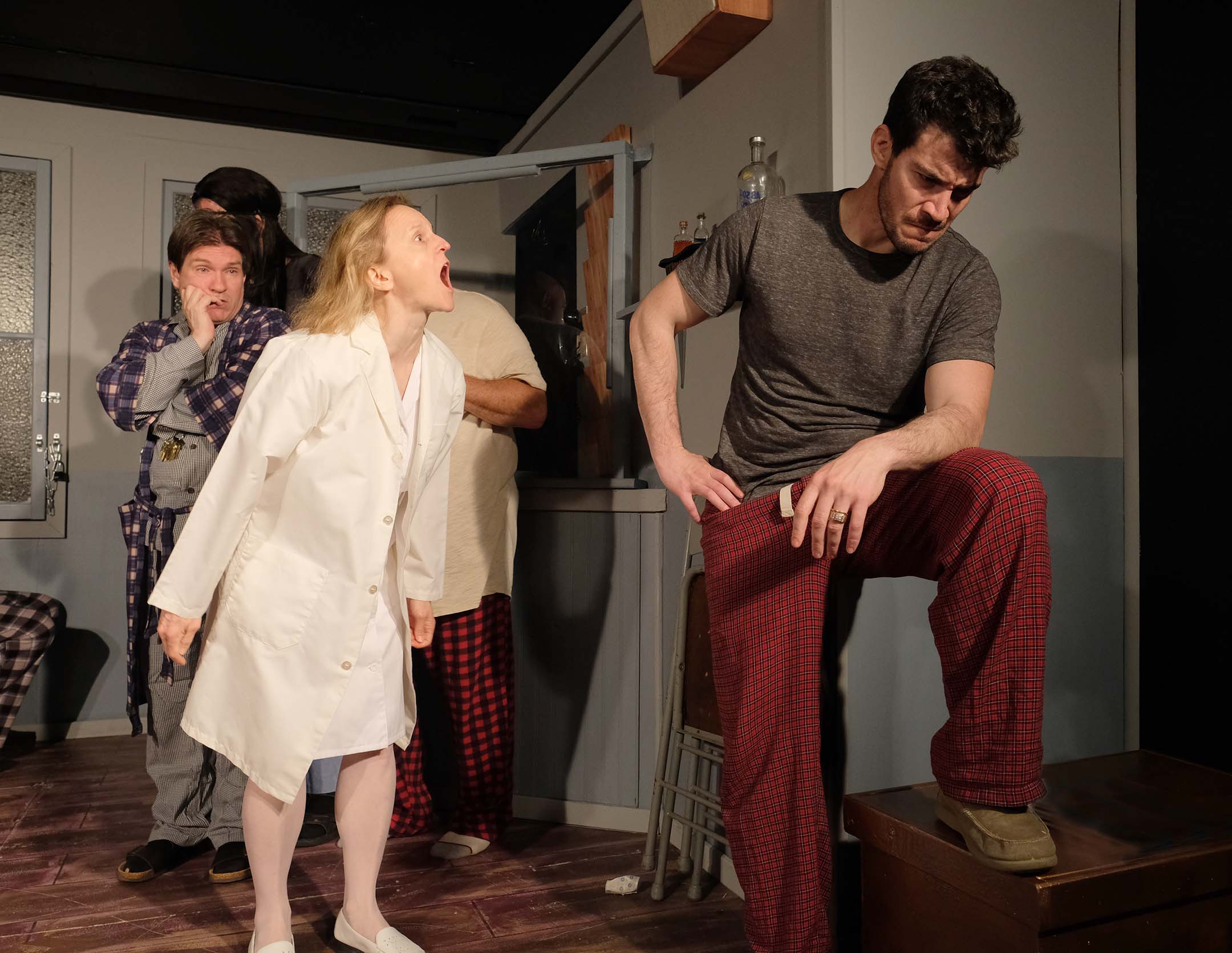 Tom Shewchuk – Chief Bromden
I am excited to reprise my role as Chief Bromden in this full-scale production of One Flew Over the Cuckoo’s Nest, having played the part in the previous stage reading at Center Playhouse.  I thank God for allowing this opportunity, my beautiful wife Donna and daughter Rachel for putting up with my rehearsing, the director Dave for giving me this part once again, and all the cast and crew for making this a memorable experience.  As a “veteran” of several productions, it’s always nice to come back to Center Players.  Time to make some magic!

Vince Fay – Dale Harding
Vince is happy to be returning to the Center Players stage.  He was last seen here trying to hide his donuts in The Boys Next Door, and trying to decide if he should reconcile with his ex-wife, again, in Neil Simon’s The Dinner Party.  Most recently he was Thaddeus the Apostle in The Living Supper.  Other shows have included The Italian American Reconciliation, Under the Yum Yum Tree, Art, and Other People’s Money.  A graduate of Kean University, Vince hopes that you enjoy the show, and remember, we are all psychoceramics.

John Morris – Billy Bibbit (Weekends of 5/4 and 5/11)
John is thrilled to be playing Billy Bibbit in this production of One Flew Over The Cuckoo’s Nest. It has been a blast working with such talented folk. His other notable roles include Barry Klemper in The Boys Next Door and Inspector Kemp in Young Frankenstein.

Cole Rupp – Billy Bibbit (Weekends of 5/18 and 6/1)
Cole  is excited to be playing Billy Bibbit In Center Players production of One Flew Over the Cuckoo’s Nest. He currently attends Jackson Liberty High School in Jackson township. Some of his past shows include Rabbit Hole, Wait Until Dark and Grease. He also has past experience as a stage manager. He would like to thank his friends and family for all the guidance and support.

John Stillings -Scanlon
John is excited for the opportunity to be a part of this production of One Flew Over the Cuckoo’s Nest as Scanlon. He previously portrayed Mr. Hedges in The Boys Next Door, Andrew in The Living Last Supper, the Policeman in The Thirteen Days of Christmas and others all under the direction of Mr. Dave McGrath. He is grateful for this time acting and working with this talented cast and crew. Break a leg everyone!

Perry Mitchell – Cheswick
Perry  has performed in live theatre for 7 years.  His list of local productions  include Gone With The Wind, Heaven Help Me,  Moonlight and Magnalios and others.  Hs film credits include Tougher Than Leather, D.C.Cab and The Documentary to The anti-apartheid Video Sun City in which he appears with world famous musicians.  Perry comes to theatre via the music industry.   He has directed or produced videos for Nirvana, Tad, Beasties Boys, Soundgarden, Big Audio Dynamite and many others.  He recently appeared in Tara Elliots released video and produced videos for both J Rock and lil Wayne.  Perry’s passions include American Motorcycles, Fight Sports, Spiritual Pursuits, and  travelling with his wife.

Bob Gaydos – Martini
In the 1970’s, as a teenager Bob developed a passion for Acting and Music but had to put his plans on hold because of personal reasons. Starting a construction company, 1977 at age 19 and married to his wife, Margaret at 22, life took on a different meaning. Four children and two grandchildren later he was immersed into a life that had no time for much else but work, family and helping others.
Fast forward to 2015! He decided it was time to start doing the things that he has put on “HOLD” after all those years. Playing live music (singer/songwriter) became a regular thing for him and after a lot of thought he reached out to childhood friend Dave McGrath, (One Flew Over the Cuckoo’s Nest’s Director) and asked for some direction on “how to go about getting into acting?” Dave’s response was “you just did!” Dave immediately asked Bob if he could put some music in a play that they were currently in rehearsal for The Last Living Supper for which, Bob jumped at the chance. Then with a stroke of luck, a spot in One Flew Over the Cuckoo’s Nest became available, and he was offered the role of Martini, which he quickly accepted.
Bob is proud to be making his Center Players debut in One Flew Over the Cuckoo’s Nest. He has also appeared in two music videos by the band OWEL, Every Good Boy Does Fine! as the lead character and Paper Hands.
Thanks for all you do!

Frank Leonhardt – Ruckley
Frank has appeared in many Community Theaters throughout New Jersey. He last appeared on Center Players stage as Mr. Klemper in Boys Next Door. He has just completed the role of Officer Krupke in West Side Story. He is pleased to be performing  in this terrific show. Break Legs to the entire cast and crew!

Dave Duncan – Randle P. McMurphy
Dave is honored and humbled to join this fabulous cast and crew of One Flew Over the Cuckoo’s Nest. This will conclude his debuts in his top three desired roles, having partaken in previous performances as Daniel Kaffee in A Few Good Men and George Milton in Of Mice and Men.  Dave also directs and with other groups and is always excited to be part of the community in bringing joy and entertainment to its members.  If you’d like to know more, please feel free to come talk to him after the show.

Ben Alexander – Aide Warren  (SAG/AFTRA)
It was a dark and stormy night – ok it was drizzling and chilly; when I wandered into a small abode on South Street in Freehold. I was looking for warmth and respite from the elements when I ran into a group of fellow weary travelers. They beckoned me to stay and perform for a while with them. Little did I know then that this madness you are about to witness would ensue. This is my first time performing here or anywhere in 9 years and I wish to thank our esteemed director for putting his faith in me as well as Center Players for taking me in. To the rest of the cast you are all a bunch of nuts in my book so how fitting that we do this play. “Remember: there are no small parts, only small actors.” ~ Constantin Stanislavski.

Christopher Berry – Aide Williams
Chris is very grateful to be performing once again at Center Players! Just last year, He took part in a read-through performance of One Flew Over the Cuckoo’s Nest  as Aide Warren. Now he’ll be the opposite aide which is quite fitting to be the next step in his evolution (LOL). Chris has plenty of community & college theater credits under his belt. His taste for theater began in high school with productions of Twelfth Night and A Funny Thing Happened on the Way to the Forum.  His first major musical experience was as an ensemble performer in a production of Hairspray  in East Brunswick’s Playhouse 22 in 2011. He graduated Brookdale Community College in 2016 with an AA degree in Communication Media. BPAC credits: Haunted Theater 2012-2017 and cast member of Spamalot.  For the months of January & February of 2015, he performed in two productions at First Avenue Playhouse in Atlantic Highlands, In-Laws, Out-Laws  and With this Ring. In the latter show he performed his first lead role in an original play. These two shows at First Avenue were directed by the same director of the show you are seeing right now – Dave McGrath.

Kathy Kutalek – Nurse Ratched
Kathy is excited to be portraying the villainous character of Miss Ratched. Kathy was last seen at Center Players as Gabrielle Buonocelli in The Dinner Party. Other favorite roles include Aunt Eller in Oklahoma!, Mammy Yokum in Li’l Abner, Sister Berthe in Sound of Music, and Emily Brent inAnd Then There Were None. Kathy is grateful to be working with such a talented cast under the fine direction of Dave McGrath and the production staff of Center Players. Off stage, Kathy has two beautiful daughters, owns a periodontal practice in West Windsor, and sings with her church choir. Kathy sends much love to her family & JZ for their endless support!

Elizabeth Stamat – Nurse Flinn
Elizabeth is proud to be back performing at Center Players where she previously appeared in Picnic as Millie. Other credits include Amadeus as Constanza, Crossing Delancey as Isabelle, Murder On The Nile as Christine, Dog Sees God as Van sister and Eye Of God as Janice. Elizabeth would like to thank Schegoggs and her family for their love and support.

Raymond Sammak  – Dr. Spivey
Ray began acting in college on a dare from a friend, playing the lead in Shakespeare’s Macbeth. In New York, Ray studied acting at the Neighborhood Playhouse and appeared in several Off-Off Broadway productions including, A Midsummer Night’s Dream and The Marathon. At The New Jersey Shakespeare Festival, Ray appeared as Bernardo in Hamlet, opposite Eric Booth of the famous Booth acting family.  Since 2008, Ray has appeared in many Center Players’ productions including: Driving Miss Daisy, The Odd Couple – Female Version, 20th Century, Twelve Angry Men, I’m Not Rappaport, The Passion of Dracula, The Diary of Anne Frank , All My Sons and Lovers & Other Strangers. Ray is thrilled to be back at Center Players with such a talented cast, director and production crew.  Ray, who lives in Manalapan, is also an award winning artist. You can check out his work at: raysammak.com.

Harold Gunzenberger – Aide Turkle
Harold is making his stage debut at Center Playhouse. He is a retired oral surgeon. For many years, he has been a long time fan of Center Players Productions. He is most grateful for Director David McGrath for affording him this opportunity, and he remains in awe of the talented group of actors assembled for this production. He thanks his wife, Sue, for her encouragement and support, and looks forward to any opportunities to perform in the future.

Kathy Purcell- Janovic – Candy Starr
Kathy is very excited to be making her debut at Center players as Alluring Candy Starr. Kathy is no newbie to the community theater stage and enjoys playing character roles and especially comedic roles.  Candy , I mean Kathy would like to thank the very talented cast and super talented Director Dave MCgrath. Thank you Dave for casting me in these very interesting character roles throughout the years. And thank you to Roberta and Sheldon Fallon for their dedication to Center players and the Arts. Now let’s Break some legs..not really just theater talk lol

Nathalia Dworakowski – Sandra
Nathalia is a Brazilian actress who has a bachelor’s degree in English Language and Literature. Upon completion of her BA, Nathalia started studying acting in New Jersey in 2014. After moving back to Brazil she continued studying acting at O Tablado, one of the best drama schools for amateur actors in Rio de Janeiro and was given the chance to perform in several plays in Rio as well as on a Youtube comedy channel. She was also a competitive dancer for more than 5 years. She has also had the opportunity to perform in The Italian-American Reconciliation a play directed by Dave McGrath in 2017. She is looking forward to continuing her acting studies as well as having opportunities to perform on stage and movies.

Dave McGrath  – Director
Along with several theatrical readings this is the fourth Signature Series Presentation Dave has directed here at Center Players. The others being The Rainmaker, The Dinner Party and The Boys Next Door. He is grateful to have the opportunity to work with such a talented and creative cast, crew and management.