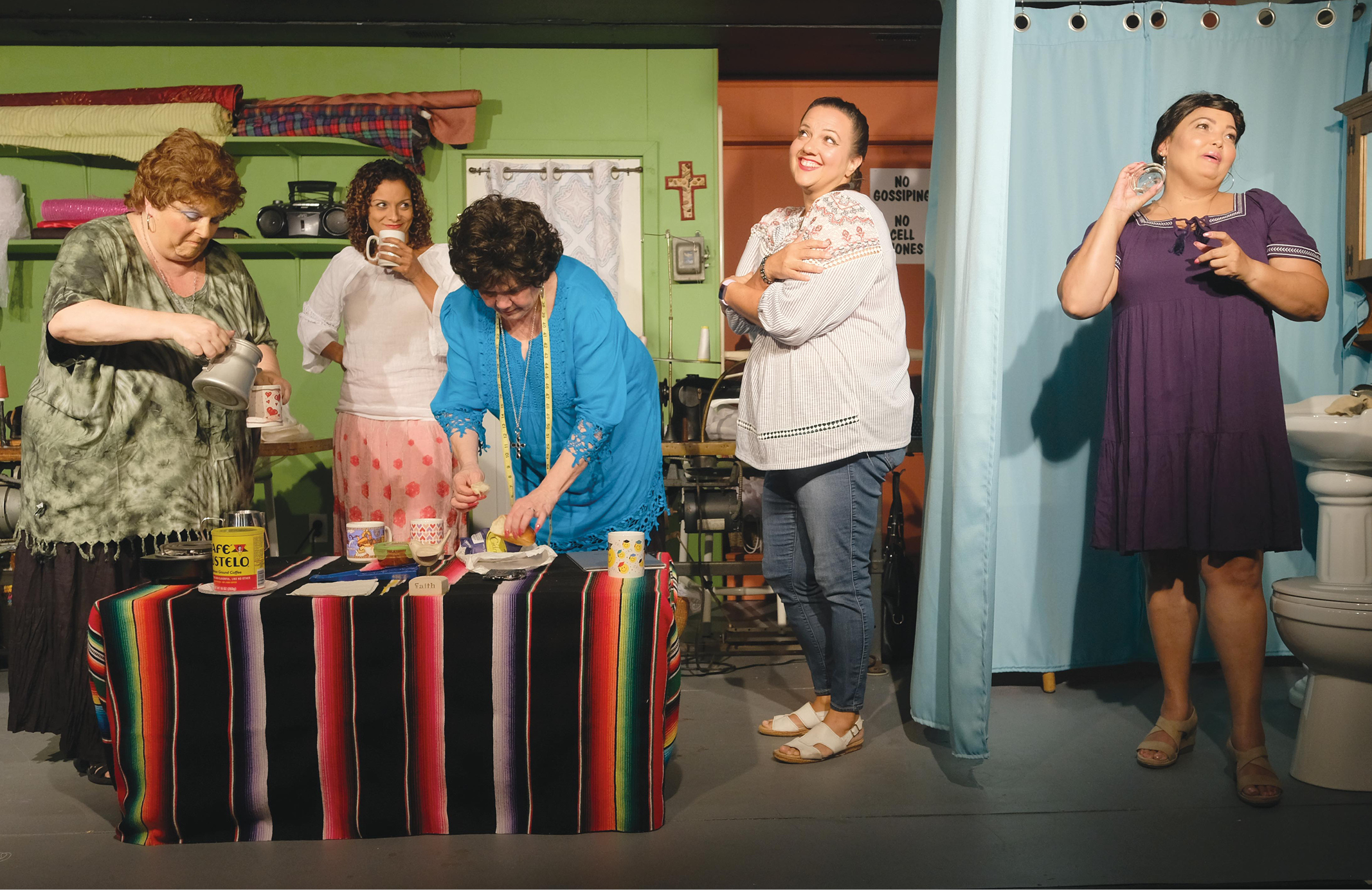 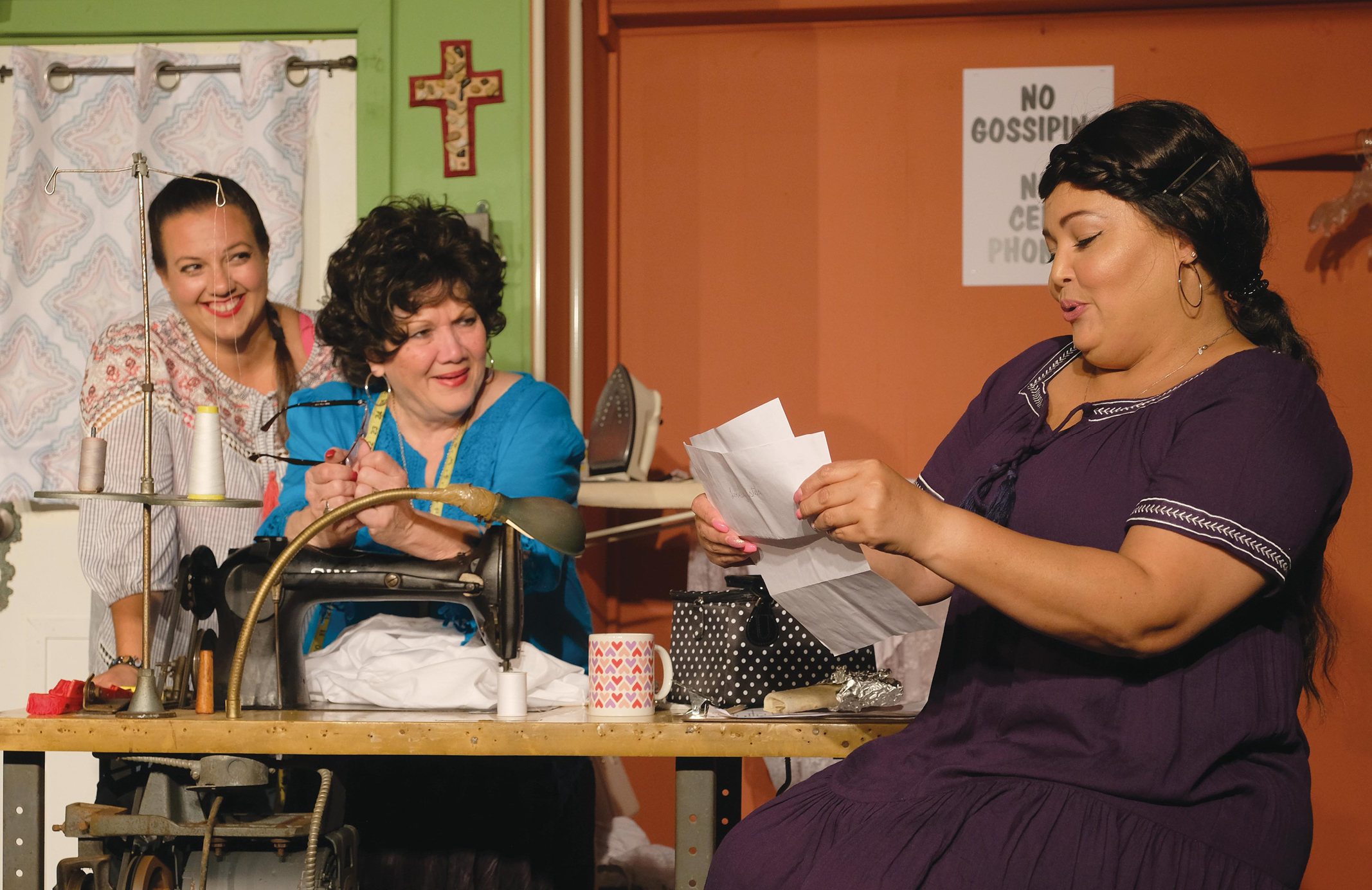 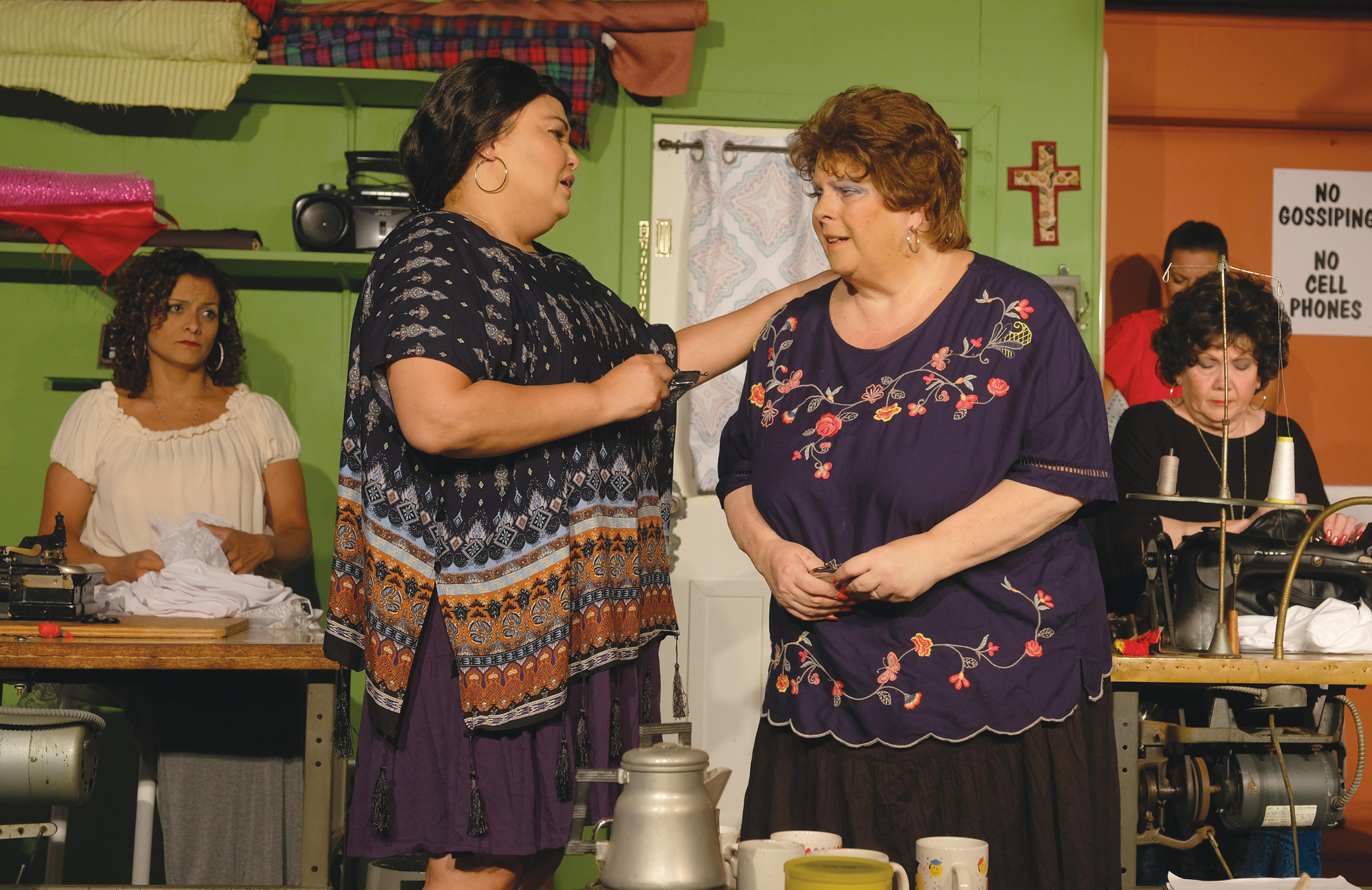 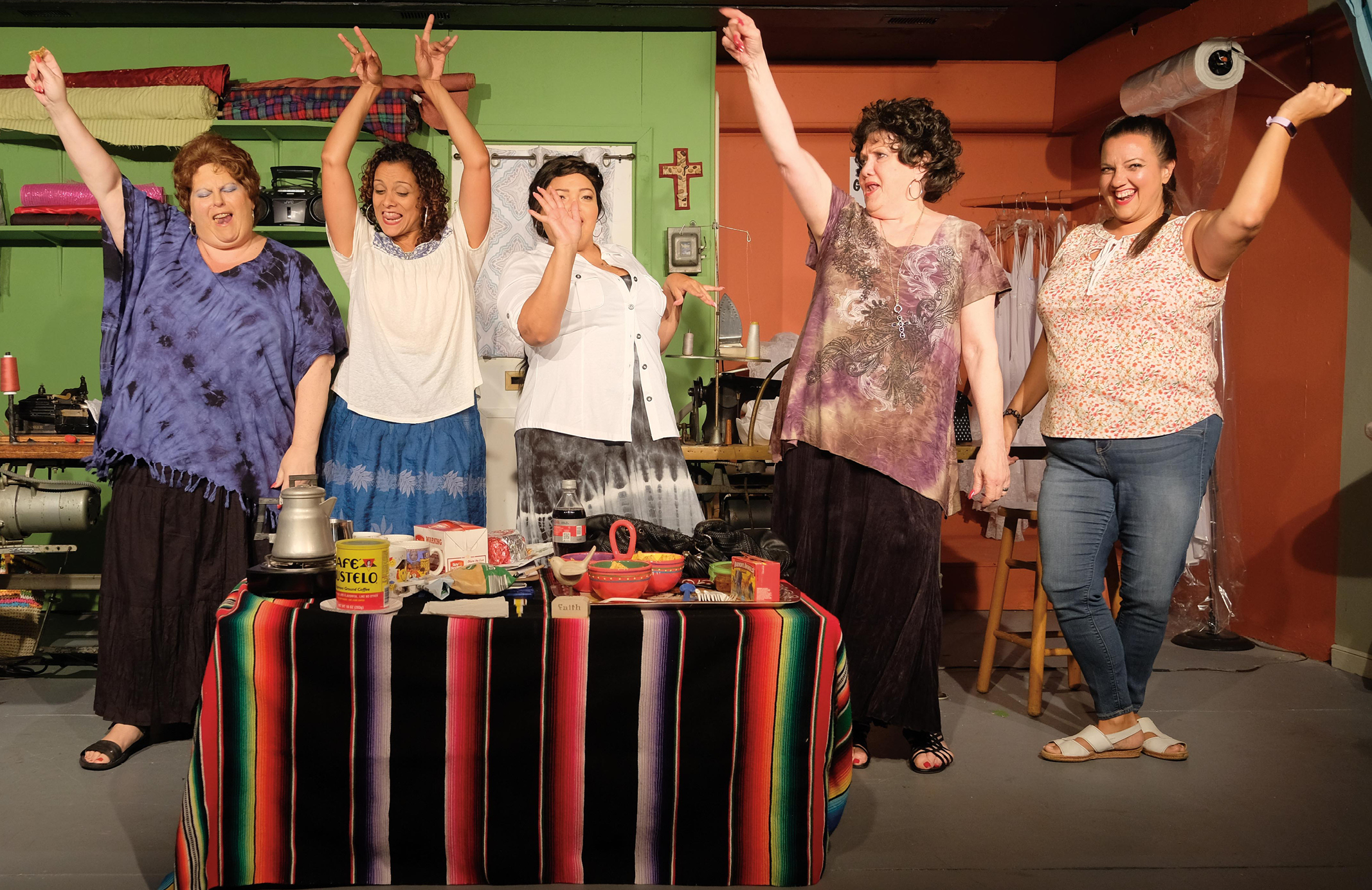 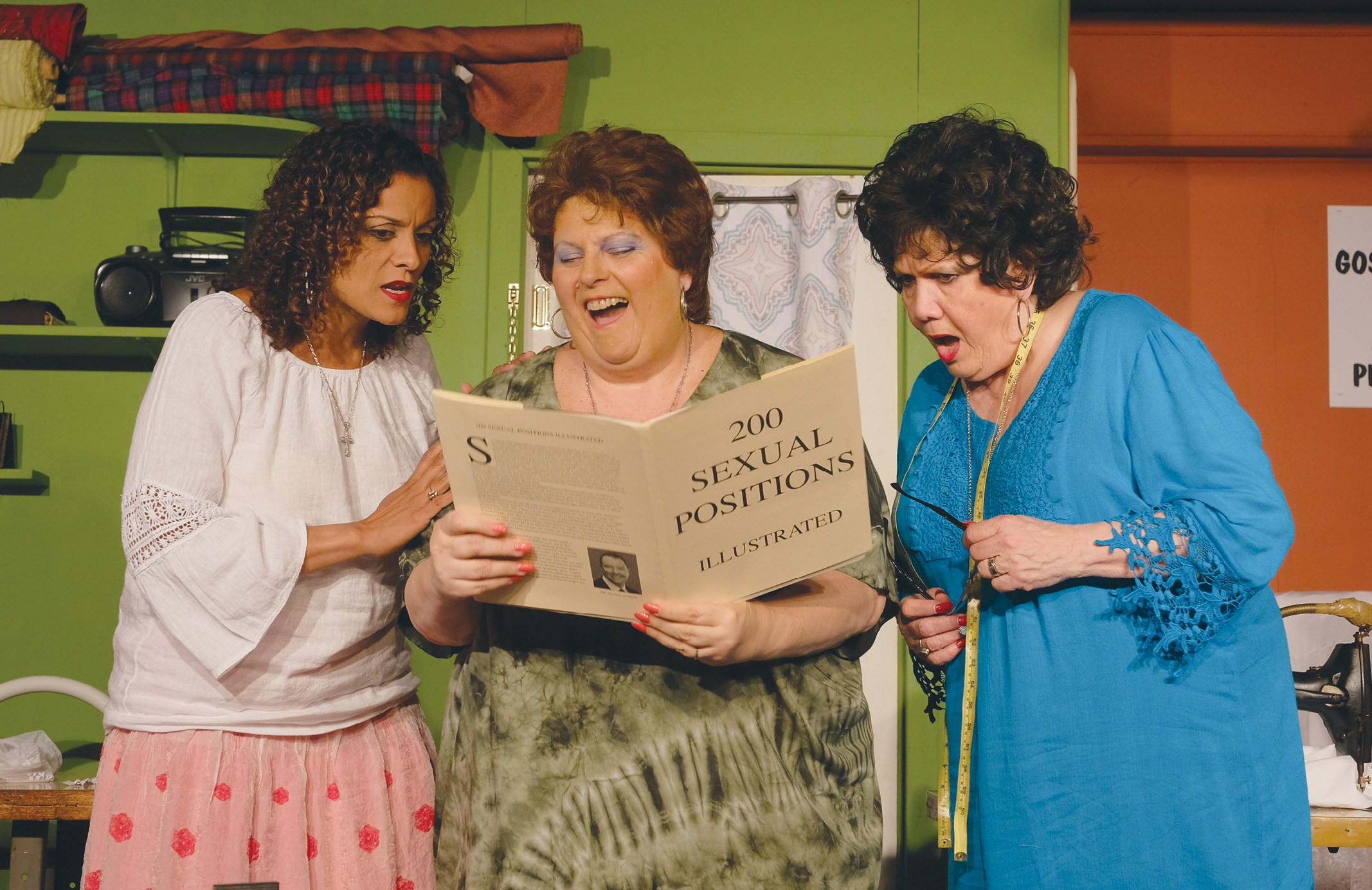 This play is set in a tiny sewing factory in East Los Angeles in September 1987 and explores the issues of gender politics and the Latina immigrant experience. The story is told from the point of view of Ana, the youngest employee at the factory. Ambitious and bright, Ana yearns to go to college, but cannot afford to. The action follows the course of a summer at the factory, as the women talk about their lives, loves and deepest desires while attempting to meet impossible production deadlines.

Judy has been performing in area theaters for over 30 years. She has twice been nominated for a Perry award by NJACT for her roles in Neil Simon’s Jakes Women (Best Supporting Actress) and Brighton Beach Memoirs (Best Actress). Favorite roles have included Hannah in Crossing Delancey, Lucille in Cemetery Club, both Mickey and Sylvie in Odd Couple (female version), Miriam in Beau Jeste and Ruth in Friends Those Golden Years which culminated in a once in a lifetime opportunity to perform Off-Broadway in 2010. Judy has enjoyed performing with the Stonebridge Drama Club in her Active Adult Community, in Generation’s Apart, California Suite, Plaza Suite, A Radio Suspense Mystery Theater and most recently Lovers and Other Strangers. Most dear to her heart is the role of Carmen in Real Women Have Curves which Judy had the honor to portray 14 years ago for Center Players. Now, being given the opportunity to reprise this role is surreal because Carmen is a character that has touched Judy’s heart and has encouraged Judy to be fearless, and introspective to find the soul of this woman. While not Latina per se Judy has always felt a connection with her inner Latina with her Sephardic background and love of Latin music! This cast of gloriously beautiful, real, strong, and brave women came together during an intense rehearsal schedule directed by a powerfully positive and empathic woman and supported by a team of devoted and unconditionally accepting men and women. Judy is grateful for the contribution of each and every one. Always grateful for her husband of 42 years she wants to thank him for putting up with unfolded laundry, meals on the run, and being willing to give up his summer for her passion.

Lazarita is a Cuban-American opera singer from Bayonne. This is her very first acting role and she considers herself lucky to be working with such a talented cast, crew and director. She dedicates her performance to Thomas Walsh for his continuous support and the memory of her beloved parents, Mercedes Perez and Rogelio Omar Perez.

This production marks Linda’s debut at Center Players, but, she’s no stranger to community theatre. A true native New Yorker, she’s especially proud to be of Spanish and Puerto Rican heritage and her immersion into the diverse richness of the Latino culture. As such, she was immediately drawn to audition for Real Women Have Curves. Linda now resides with her husband, Michael, in the Renaissance Adult Community of Manchester. She is a mother of 4 and a grandmother of 5 (including triplets)! She has always loved theatre and supported her children’s pursuit of same, as vocalists and actors. She began with the Hexagon Players Community Theatre of Mendham, N.J., over 25 years ago, when she landed the role of Old Sally in the musical, Oliver. From there, she would go on to land a fun variety of lead roles which included, Lily in Annie; Edith in Never To Late; Adelaide in Guys And Dolls; Claire in Rumors; Mrs. Livingston in Courtship O Eddie’s Father; Olive in Female Odd Couple; Lucy in Dracula Baby; Ouiser in Steel Magnolias. She also worked in most every aspect of theatre in the capacity of Wardrobe Mistress, Set Designer, Publicity Agent, Prop Coordinator, Make-up Asst., Producer, and eventually,… Director. Within 10 years she became the Vice-President of the Hexagon Players Board. While their family lived in Morris County, she got to perform in a few other theatre venues. Since moving to Renaissance 8 years ago, she has acted and directed in several of their PAC (Performing Arts Club) shows. In addition, she currently performs as a multi-lingual vocalist in a 10-piece community band known as The Continentals,… has recently ventured into her own ‘stand-up’ comedy bit,… and up until recently she sang, alongside her husband, as members of a Doo Wop group. She currently serves on the PAC Advisory Board Panel, and thoroughly enjoys teaching a Creative Actors Workshop along with a fellow actor/resident. Linda’s job/career experience has been in accounting, hospital administration, nursing, sales management, Spanish interpreting in a school, and visual merchandising. Besides acting, her hobby skill-set has been in artwork, writing poems/parodies, and dabbling in other languages (of which she can speak 5,… including Portuguese, Italian, & French). She’s very happy to be working in this socially relevant production with a talented cast, under the smart direction of Bernice, whom she thanks for the opportunity! She appreciates the assistance of the entire ‘RWHC’ Production Crew and is MOST grateful to her husband for the continuous loving support of her endeavors. MUCHAS GRACIAS!

Carmen was born in New York City and grew up in The Bronx. Both her parents were born in Puerto Rico. This Latina has referred to herself as a “Nuyorican” or “Boricua.” These terms refer to Puerto Ricans who live in New York or anywhere in the United States. Simply stated, she is proud to be a Puerto Rican American. Carmen has three children, Armando, Nina, and Valentina and is married for over 20 years to the love of her life, Ricci. She is the proud owner and director of The Peace Rose Montessori School in Sayreville NJ. She’s dreamed of being on stage many times but was unsure of her abilities. With the encouragement of her husband and good friend Marina, she finally had the courage to audition. She is extremely excited to make her debut at Center Playhouse as Rosalí in Real Women Have Curves. She is grateful to her family for holding down the fort during her rehearsals and performances. Her prayers were answered and she hopes the audience enjoys the show as much as she has loved the whole experience!

Daisy was born in Puerto Rico and came to the United States as a young child. As a child she always had a passion for acting but never really pursued it. As an adult she pursued her acting career the summer of 2010 when she attended Playhouse 22 acting academy. She has been in several productions: As Bees In Honey Drown, 2010 and Mr. 80%, 2012. In 2017 she was in two independent films Free and Double Life, not yet released.
I want to give Glory to God for allowing me to flourish as an actress. Also, I want to thank my husband and children for allowing me time to do me!

Thanks to our director Bernice for believing in me and to my fabulous cast members.

Bernice is delighted to have the opportunity to direct Real Women Have Curves by Josefina Lopez which she first directed for Center Players in 2005. She is thrilled that the original Carmen, Judy Spiegel, is able to reprise her amazing role. This play has all the elements that Bernice looks for in the material she wants to bring to life. It is socially relevant, humorous, poignant, has great characters, and is beautifully written. It is particularly timely since it puts faces on the hard working Latino immigrant population that has been in the news lately and touches upon their dreams, fears, and experiences in our country. After more than 50 years of working in theater and the arts Bernice feels very grateful for the wonderful people she has had the good fortune to work with. She is particularly proud to have been awarded the NJACT (New Jersey Association of Community Theaters) 2018 Perry Award for Lifetime Achievement. Although she doesn’t work for awards, it is a great honor to be recognized by one’s respected peers. The Center Players family is particularly close to her heart. The amazing cast and crew of Real Women Have Curves have so many of the wonderful qualities of the Latina women they portray; hard working, brave, kind and devoted to one another. Of course the production could never go on without the tireless hours of work of our behind the scenes crew and the support of the wonderful businesses and friends of Center Players. She thanks her husband, Bob Szita, the Producer for all the award winning productions they worked on together for the past 35 years, for his amazing perseverance to make all the hundreds of details that create this Los Angelos sweat shop come alive. She is always surprised how calm he can be when the back stage drama of putting on a live show can tip most others. It is with pride and gratitude that Bernice offers this beautiful play to illuminate the universal spirit of people working together that can change the world!

This is Marina’s second time stage managing at Center Players. Previously, she stage managed Shakespeare’s Lost Masterpiece. She has also performed in two plays at Center Players as Mrs. Baker in Butterflies are Free. and Lady Bountiful in The Emperor’s New Duds. Her most recent performances include Mrs. Greere in Capital Productions presentation of Annie and Lilith in The Puzzle at Playhouse 22. Marina is an avid storyteller and has performed at Belmar Arts Center’s annual Tellebration. She has performed with On The Spot improv troupe in Bloomfield, NJ and Comedy Dogs improv troupe in Atlanta, GA. While in Atlanta she took several acting classes and participated in local theater.

Blake is proud to be back at Center Playhouse… this time behind the scenes as Co-Stage Manager. His previous acting credits include Dial “M” for Murder as Thompson and The Boys Next Door as Arnold Wiggins at Center Playhouse, both directed by Dave McGrath. He is excited to experience stage managing and learn how it all gets put together with the support of this amazing cast, crew, and staff!