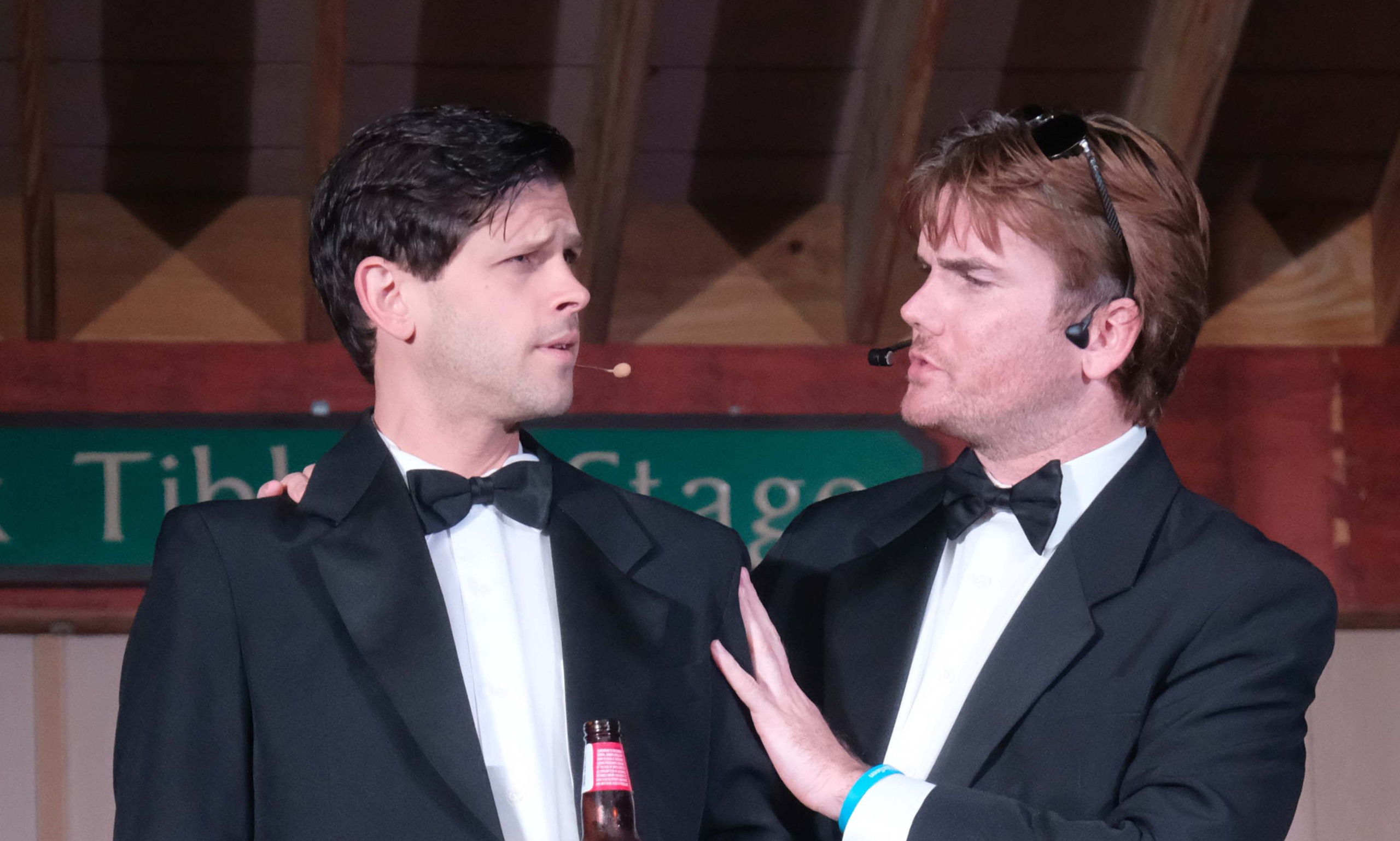 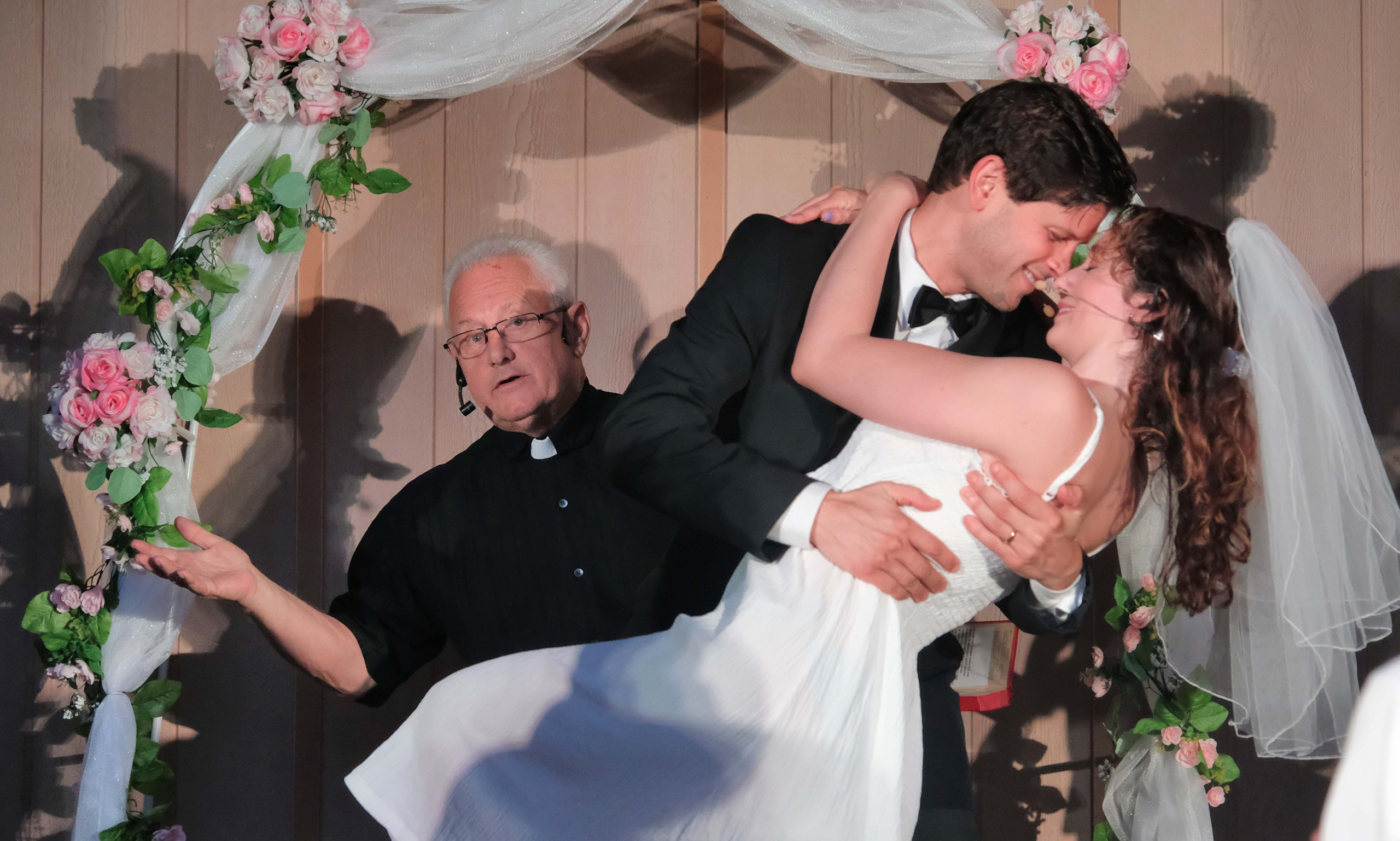 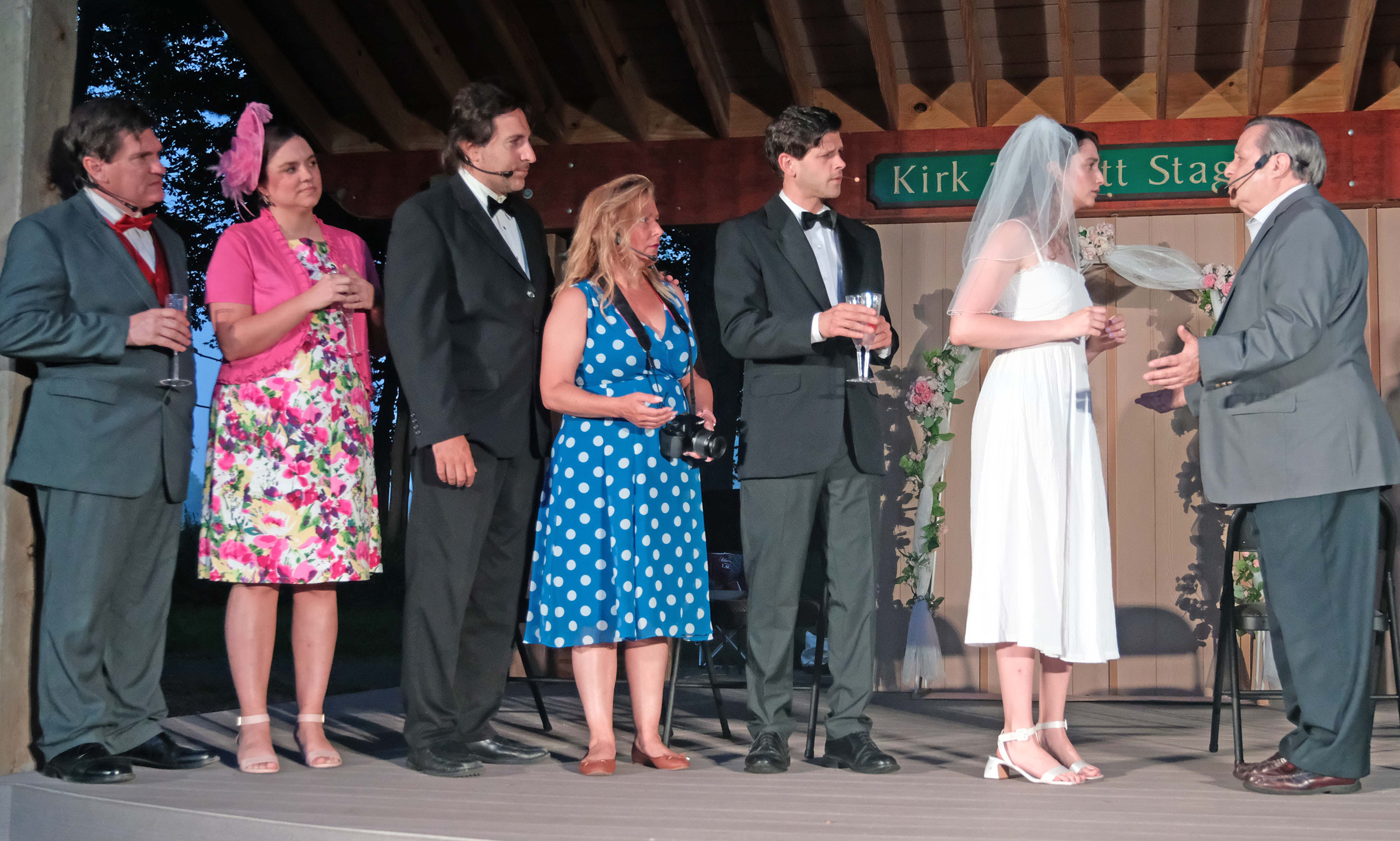 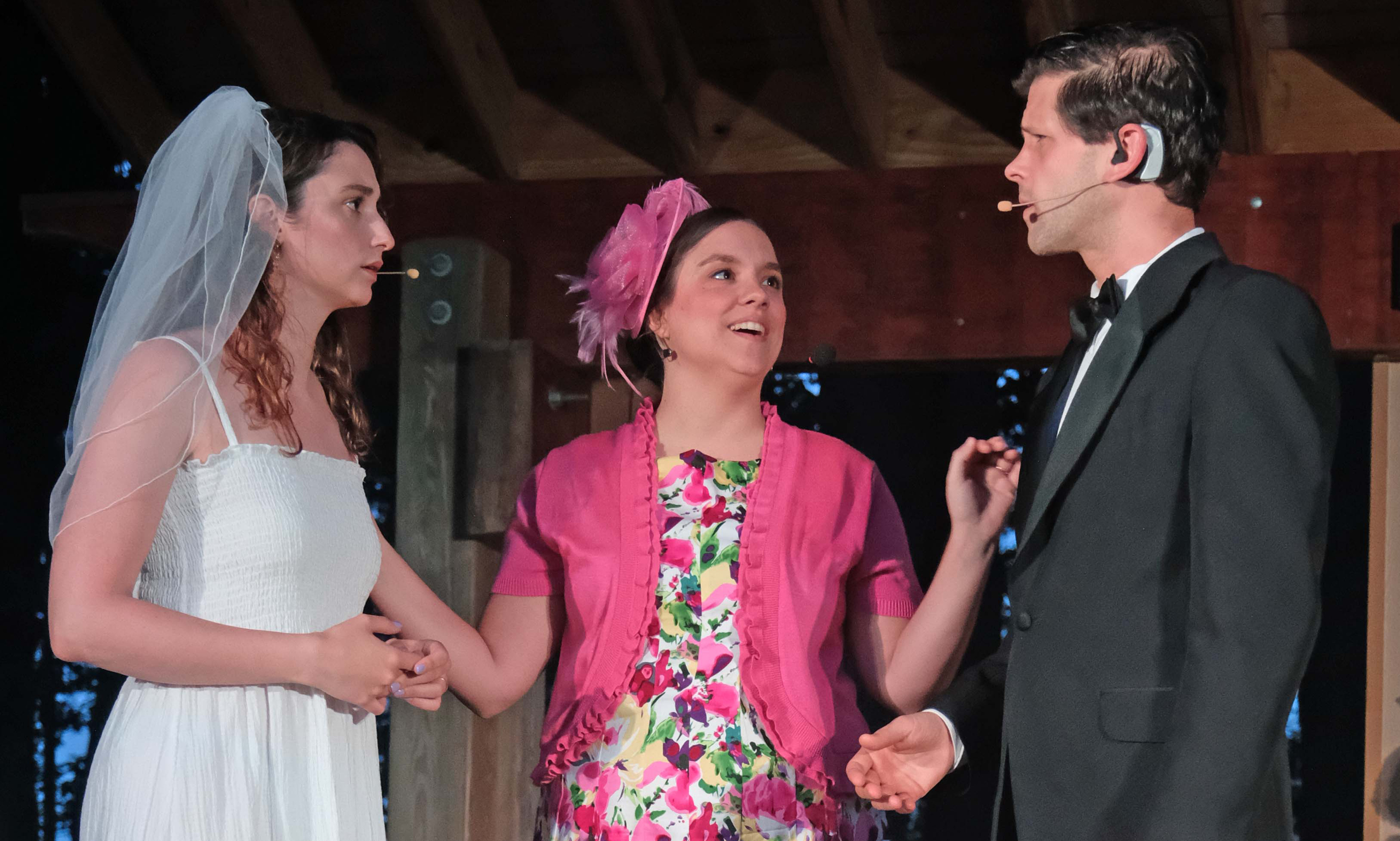 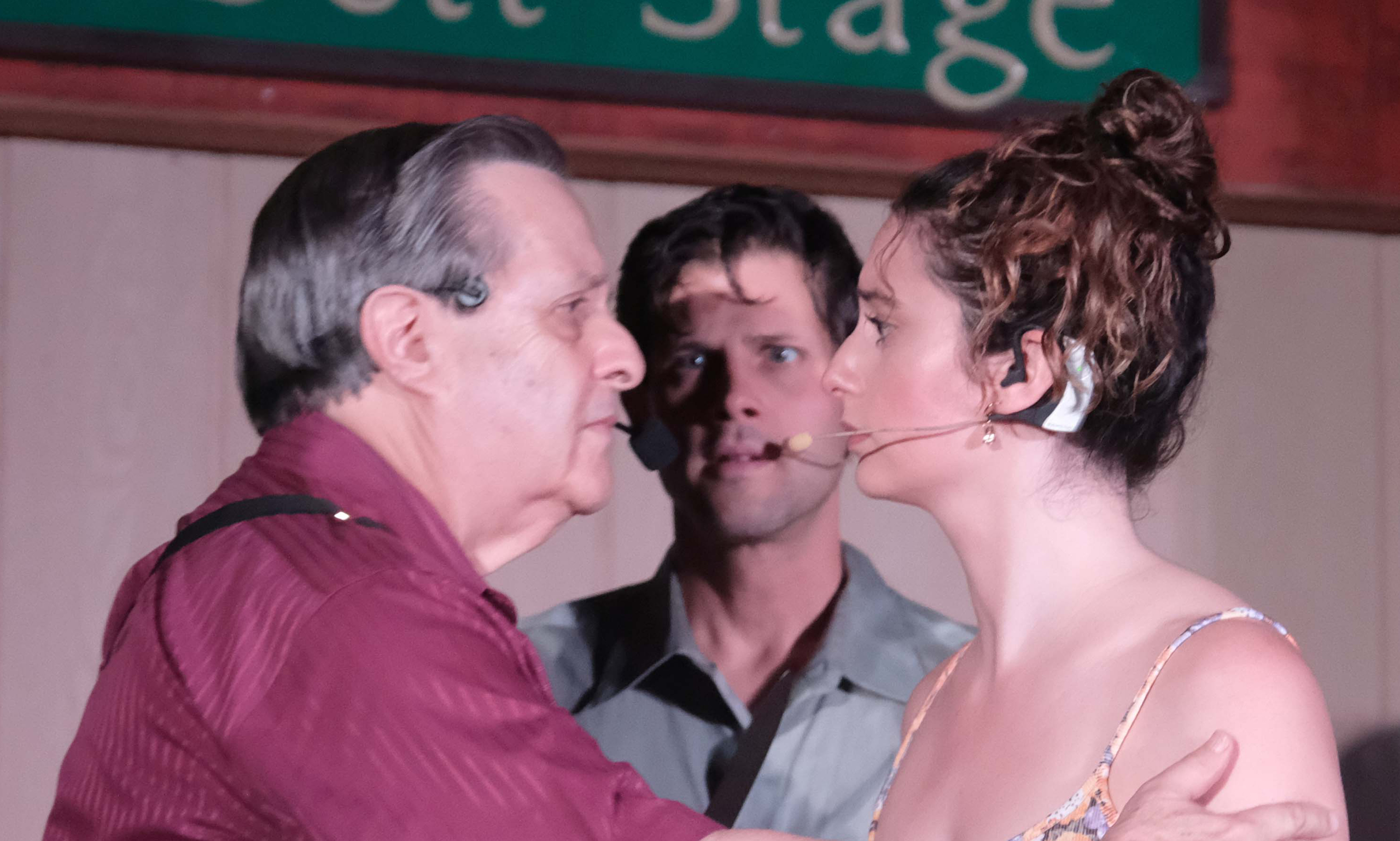 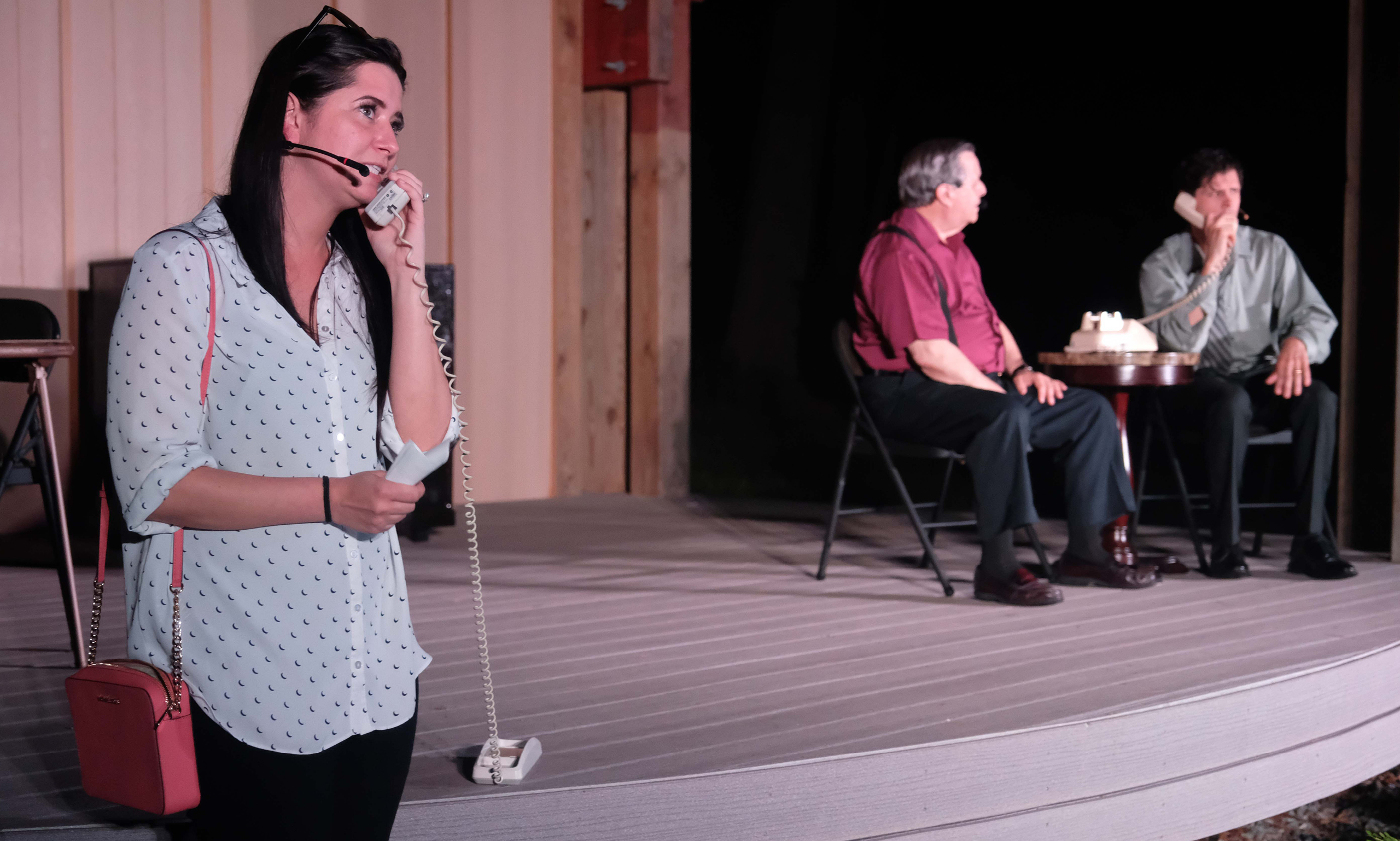 After a whirlwind courtship, Rita and Peter marry. Following their storybook wedding, an elderly man congratulates Rita with a kiss and miraculously switches souls with her. Can Peter and Rita's marriage endure the greatest test of all?

Please be advised this play contains adult content and is not recommended for children under 15 years of age.

This is an outdoor facility. You must bring your own chairs (no lounge or low beach designs)
Porta-johns are available. There will be $1 refreshments available during intermission.
First-come, first serve for your chair placement. You will be able to sign in 1/2 hour prior to curtain.

Eric M. Pertgen (Peter) Eric has an AA & a BA in Theater. Credits include stage, film, and direction. TV/Film credits include: The Marvelous Mrs. Maisel Season 3 & 4, Billions/ Season 5. Special Thanks to Chelsea my amazing fiancé for all her love and support!

Jackie Kuczinski (Rita) Jackie loves sharing stories, dressing up and playing make believe. She is thrilled to be doing those three things in public again. When Jackie is not acting, she enjoys long walks on the beach and short walks to the fridge. Some cool things she has done include being featured in a Samsung commercial for 2 whole seconds, being the lead voiceover artist for a cleaning company on Amazon that nobody has ever heard of and starring in a horror comedy short film that blew up in India and somehow gained over 100,000 views on YouTube. Jackie would like to thank her family and friends for their unwavering support as she pursues an artist’s life. Special thanks to Anthony Marinelli for giving her the opportunity to get back on stage and do what she loves.

Matthew Ruf (Taylor) is pleased to be making his debut with Center Players in Prelude to a Kiss.  Having a father for a director, Matthew has grown up in this world of theater--studying the arts and design at Kean University.  Many productions adorn his resume, but--most recently--he portrayed the role of Lt. Kendrick in A Few Good Men at The Algonquin Arts Theater.  He recently graduated with an MFA in Acting for Film from New York Film Academy. He studied in Los Angeles for a year, culminating in a final thesis project, “Hello,” where he received a Writing, Producing, and Acting credit.  “Hello” received recognition in various Film festivals, receiving an award for best sci-fi short film.  He would like to thank everyone for showing their support for the arts, especially after a trying time in our recent history.  You make this possible.

Jack Rosmarin (Tom and The Minister) Jack is very happy to be back at The Center Playhouse, his home away from home where he previously appeared in shows such as Catch Me If You Can, Visiting Mr. Green, Arsenic And Old Lace, and most recently in Lend Me A Tenor.  He is thrilled to be working with such a talented cast, and thanks the director Anthony Marinelli for this opportunity. He has previously appeared in many local area productions such as Leader Of The Pack, Phantom The Musical, Fiddler On The Roof, Sisters Rosensweig, Annie, as Clarence in It’s A Wonderful Life, On Borrowed Time, Death Of A Salesman, and as Abe in Beau Jest.

He also starred in an N.B.A. Finals promotional commercial with the late N.B.A. Hall of Famer, Darryl Dawkins. Jack sends his love and devotion to his wife Michelle and his daughter Melissa, Son in-law Ari and his Grandsons, Leo and Jake.

June Ravert (Mrs. Boyle) is a high school English/Drama teacher and is so pleased to be back at Center Players.  She debuted on their stage as Margot in Dial M for Murder. She is grateful to her girls who are always there to support her (especially Sophia who comes to all the rehearsals and becomes the extra stagehand). To the cast and crew break a leg. To Dr. Boyle XO.

Joe Zedeny (Dr. Boyle) last appeared with Center Players as Tito Merelli in Lend Me a Tenor and before that Tony Wendice in Dial M for Murder. His latest performances include post COVID-19 productions of Dealer’s Choice, Bad Medicine, and Wake Me at Midnight, all at First Ave. Playhouse in Atlantic Highlands. Other recent performances include Into the Woods (The Wolf), On the Waterfront (Fr. Pete Barry), and The Mystery of Edwin Drood (Rev. Crisparkle). Joe sends his love and thanks to his family, his friends, and to June, his loving Mrs. Boyle both on and off the stage.

Linda Paone (Aunt Dorothy)  is grateful to be back onstage after a long hiatus. She was recently seen in Center Players’ virtual productions, playing Charlotte in Charlotte’s Web, Mrs. Hartshorne in Meet the Oakleys, and directing Broadway Through the Ages. Past roles include Elaine in Arsenic and Old Lace, Snoopy in You’re a Good Man Charlie Brown, and Tuptim in The King and I. When Linda is not performing, she can be found in the tech booth operating lighting and sound or teaching at Awakenings Theatre Workshoppe in Manalapan. Thanks to Mark, Mom, and Dad for supporting my theatrical dreams.

Vince Fay (Uncle Fred) is happy to once again be working with Anthony in this wonderful play in the park.  A Kean graduate, Vince was last seen onstage at First Avenue Playhouse in Bad Medicine (trying to decide whether it was safe to leave his apartment) and Dealer’s Choice (where he tried to win big so he could turn a toilet into a restaurant).  You can also still see Vince and Donna in the window of Center Players (where they may never leave!) performing in Same Time Next Year, last year.  It was at Center that Vince also appeared in The Boys Next Door, The Dinner Party, One Flew Over the Cuckoo’s Nest, and a number of staged script readings.  Enjoy the show, use plenty of bug spray, and remember to always try to be euphonious.

Sheldon Fallon (The Old Man) made his acting debut playing Sheriff Will Masters in Bus Stop. He quickly followed with roles in Brighton Beach Memoirs, California Suite, And Then There Were None, The Sunshine Boys, Picnic and Lovers and Other Strangers. He has also appeared in several play readings and virtual plays.  Sheldon is proud to serve as President of Center Players.  He is also President and co-owner with his wife Roberta, of the Leigh Insurance Agency in Freehold which is celebrating over 31 years in business.

Donna Niemi (Leah) is SO excited to be back with Center Players of Freehold! Past credits include Same Time Next year, Jekyll and Hyde, Wizard of Oz, Annie, Joseph and the Amazing Technicolor Dream Coat, A Christmas Carol and Various Shakespeare Plays. While not pursing her dreams of writing and acting for the theater, Donna is a full-time mom to the sweetest little boy, and real estate agent follow @Donnaniemirealtor- Donna would like to thank everyone at Center Players a beautifully talented group of people whom without, this show would not be so amazing! Lastly, Donna is most grateful to her husband Robert who always supports her dreams. To John for always helping, and of course to my sweet boy, Dexter. Everything I do, I do for you.

He would like to thank his cast for their hard work, dedication, and professionalism in bringing these characters to life, and Center Players for giving him another opportunity to play again. Finally, Anthony would like to thank his family for their patience while he spent long hours away from home, especially his wife, Alice-Ann, for her enduring support, understanding, and love.

Roberta Fallon (Producer) is very pleased to be producing her 14th show for Center Players. She enjoys working as producer, as it allows her the opportunity to work with many different directors, and to take part in the development of a show from first audition to opening night. She has also appeared on Center Playhouse stage as Helen the Maid in A Doll’s House, Mrs. Rodgers in And Then There Were None, and Irma Kronkite in Picnic. Roberta serves on the Business Board of the theater as secretary. In addition, at most performances, she can be found serving up desserts at intermission, mingling with our patrons and listening to their comments about the shows, as well as telling them about all the wonderful events which are always going on at our theater. She is extremely pleased to be working with such a talented director and cast to bring this romantic fantasy to life. She thanks her husband Sheldon for encouraging her to join him at Center Players and being her biggest supporter. She looks forward to continuing to bring award winning theater to the community.