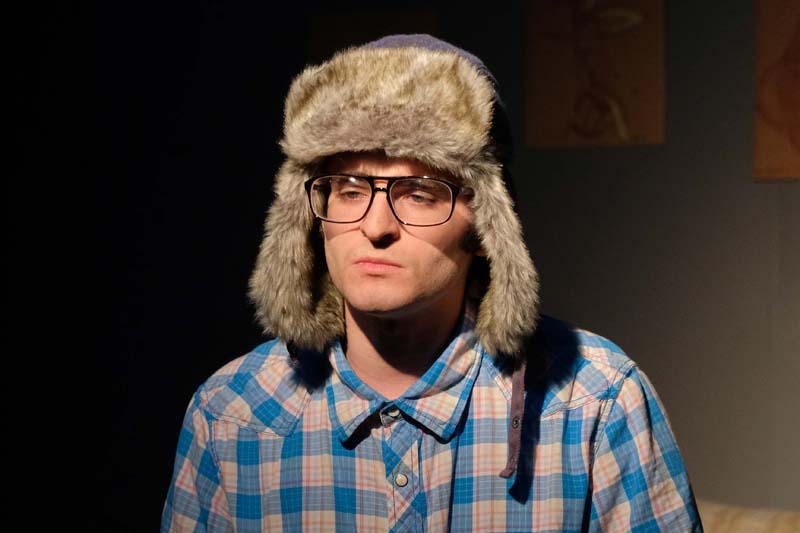 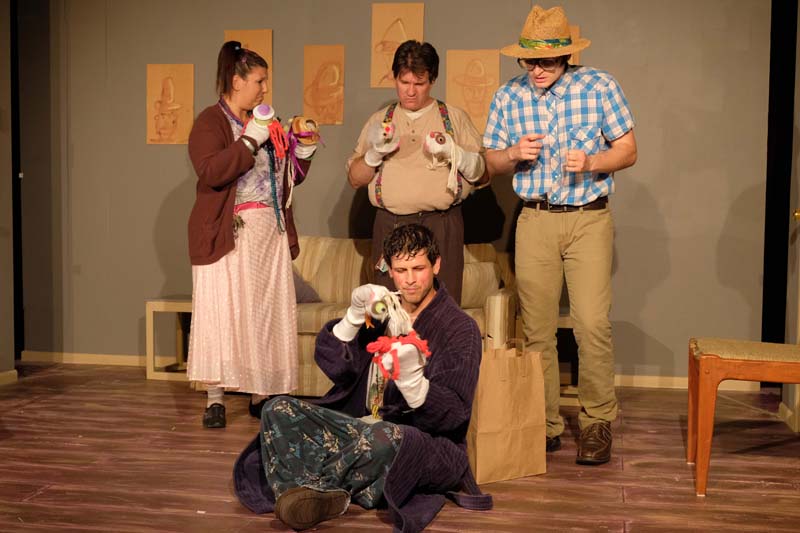 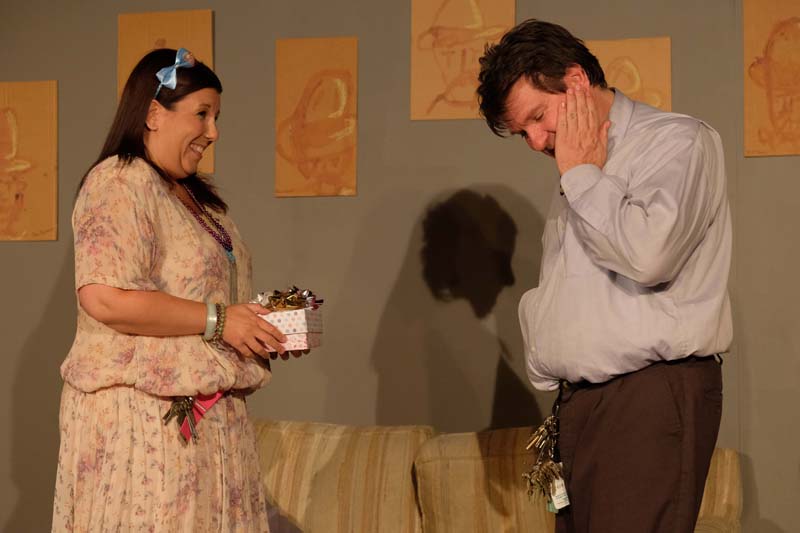 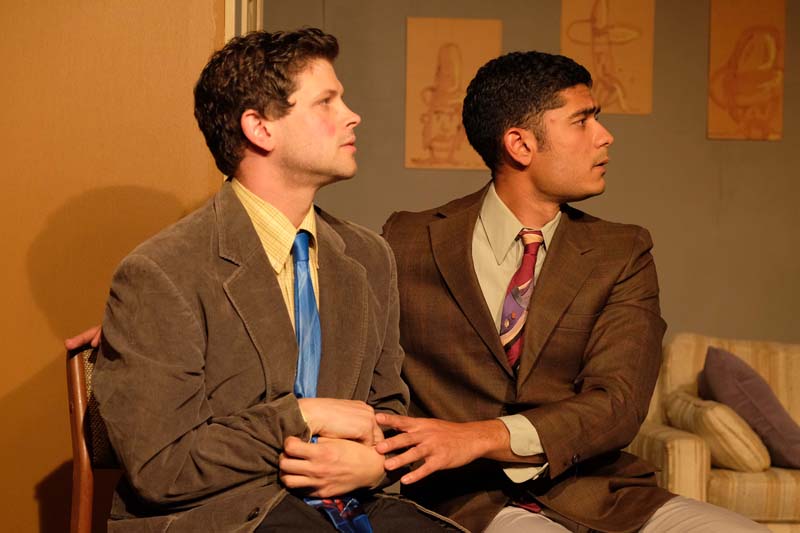 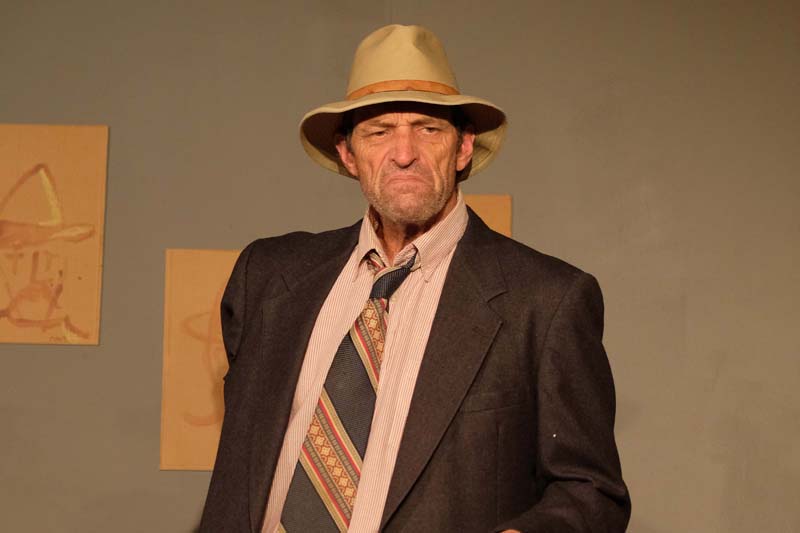 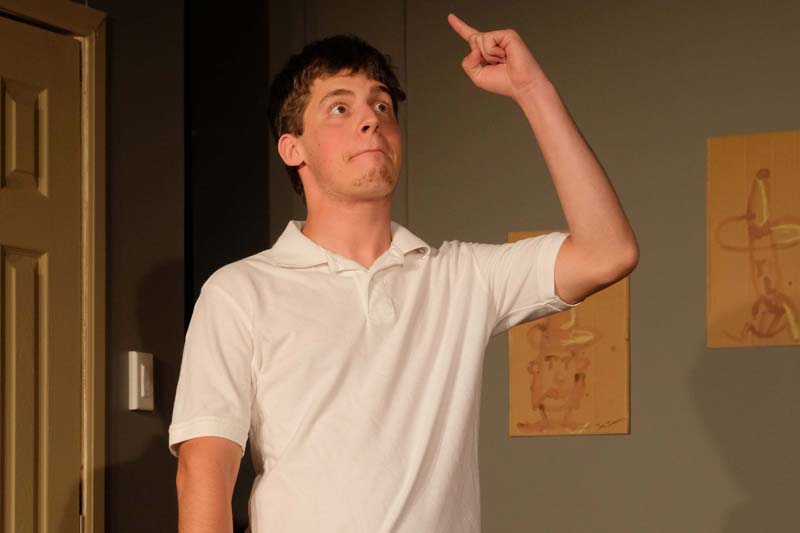 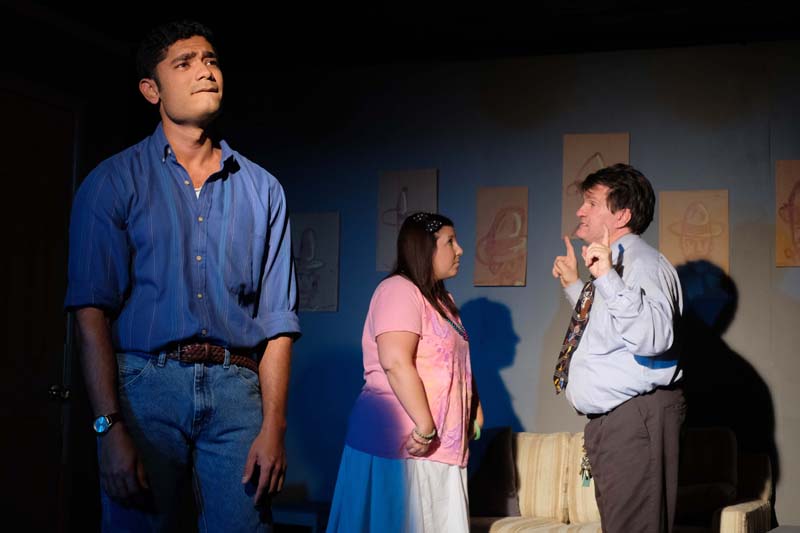 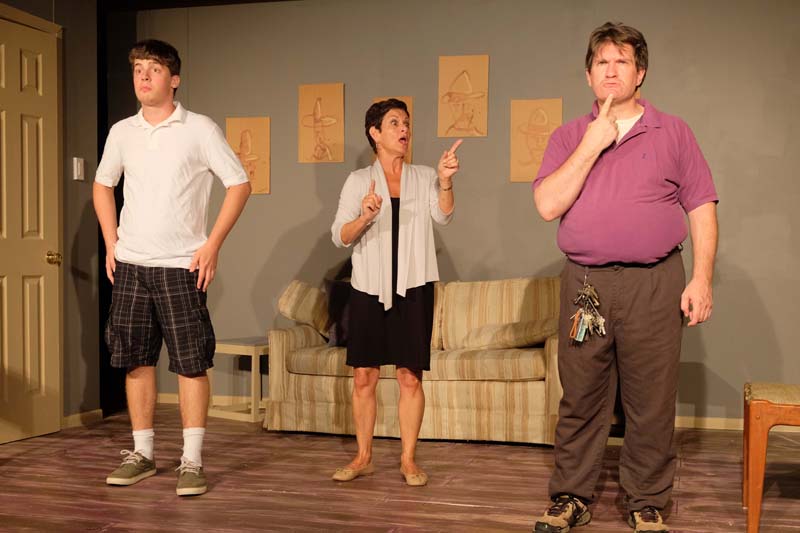 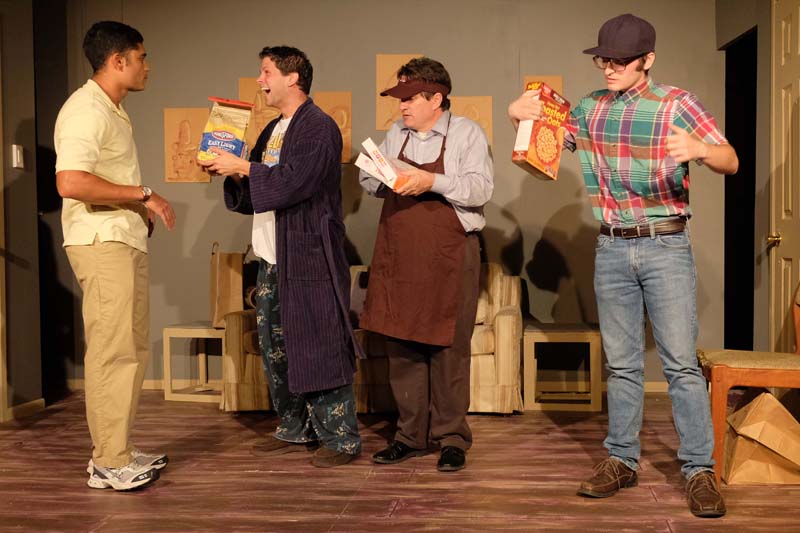 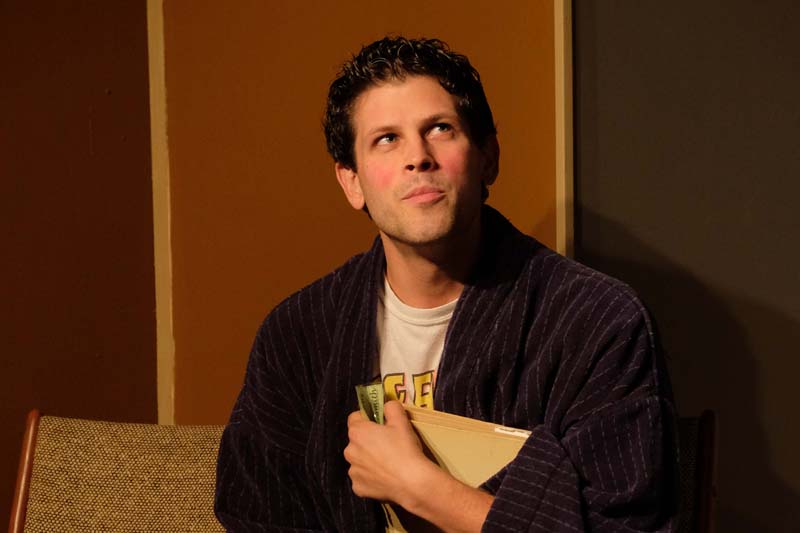 WEEKENDS IN AUGUST
FRIDAY THE 4TH TO SUNDAY 20TH

Tom Griffin’s “The Boys Next Door” will be directed by Dave McGrath This comedic-drama centers around four intellectually disabled men who live together in a small apartment, and Jack, their caring social worker who is on the verge of career burn-out. Taking place over the course of two months, the play offers scenes and vignettes to illustrate the daily lives of Jack and his wards.

Blake Taylor – (Arnold Wiggins)
Blake is excited to be making his Center Players debut as Arnold Wiggins in The Boys Next Door. His previous acting credits include Uncle Sam in Miracle on 34th Street and Ensemble in The King and I, both were performed at the Algonquin Arts theatre in Manasquan.

Eric M Pertgen (Lucien Percival Smith)
Eric is thrilled to be joining Center Players in this amazing production! Eric has an AA and two BAs, including a Bachelors of Theater, duel concentration; Acting and Stage Management/Direction. He has over 2 decades of theater experience. His favorite roles include, Seymour in Little Shop of Horrors, Ferdinand in The Tempest, Silvius in As you like it, Dr. Carrasco/Knight of Mirrors in Man of La Mancha, and Bob Cratchet in Scrooge. “I am here to remind the species of the species” –Lucien.

Ankit Sharma (Jack)
Ankit’s many theatre credits include Bill Starbuck in The Rainmaker, Andrew Rally in I Hate Hamlet, Geoffrey in The Lion in Winter, Adam Moss in Adam’s Eve, Steven Kadar in The Shop Around the Corner, and Jeff Hanson in Stocks and Blondes amongst others. Film credits include MIDS; The Web Series (Esam), Prince of Bollywood (Vikku), Marvel R Us (Fakra), Infliction (Zak), Pieces of Osiris (Erin Breakers) Cheers!

Vince Fay (Norman Blansky)
Vince is happy to be performing at Center Players. He previously appeared on this stage in Neil Simon’s The Dinner Party, as well as the staged readings of Night of the Iguana and One Flew Over the Cuckoo’s Nest. Other performances have included Art, Adam’s Eve, Sleeping Indoors, and On the Thirteenth Day of Christmas at First Avenue Playhouse, and The Boys Next Door at Soar. He has also written, directed and starred in his own short film, CEO Temp.

John Morris (Barry Klemper)
John is proud to be playing Barry Klemper in this rendition of The Boys Next Door. John’s favorite snack is Cheese-Itz, and he absolutely loves to do impressions of obscure jazz singers from the 1960s. All in all, he’s a sane man playing one who isn’t.

John Stillings (John Hedges)
John is delighted for the opportunity to be a part of this production-The Boys Next Door as John Hedges. He has previously portrayed The Policeman in The Thirteen Days of Christmas, Andrew in The Living Last Supper and Louie in One Acts all under the direction of Mr. Dave McGrath. He is wholeheartedly enjoying this opportunity of acting and working with this talented cast and crew of The Boys Next Door. Break a leg everyone!

Geri Wallens (Stella Loomis)
This is Geri’s third performance on the Center Players’ stage. She appeared as Stella in Doodle and Mrs. Klaus/Mrs.Claus in I Do Love the Holidays (Sometimes). She has been acting since 2013 and has been in several shows including Witches Brew, Singing in the Rain, and Company and the Choir Room. Her favorite role was playing the doctor in Bernard Slade’s Tribute. Geri is thrilled to be working with such a talented Director, cast and crew.

Patty Champon  (Karen Warren)
Patty is happy to a part of this Center Players Ensemble. Her past appearances on Center Players stage were as Sadie in I Do Love the Holidays…Sometimes and as Louise, the French Maid in Murder On the Nile. Thanks to Dave, as always, and a great cast and crew!!! Break legs everyone!!

Andrea Barra (Sheila)
Andrea is very excited to be returning to Center Players, having just been seen as Kay in Murder on the Nile.  She has been performing in community theatre in New Jersey and New York for over twenty-five years. Past favorite roles include: Beatrice in A View from the Bridge, Claire in Rumors, Meg in Brigadoon, Young Ellie in Leader of the Pack, Claire in Proof, Sister Hubert in Nunsense, and Juliet in For the Love of Juliet!. She also performs regularly as a cabaret singer with the White Elephant Burlesque Society in venues around New York City and New Jersey. Many thanks to the cast for their talent and enthusiasm and to Dave for trusting me with such a challenging and lovely role. Dedicated with love and gratitude to the amazing friends in my life. And to you, Otter.

Janette Hussey (Clara)
Janette is thrilled to be back on the stage, doing something she loves, after a six year hiatus. She was in the first show Dave directed, “The Bishop’s Wife.” Her most notable role was playing Madame Thenardier in Les Miserables. In her free time she loves to travel, create art, and go to the city to see shows. She is excited to be back in the game and have the opportunity to start off with an awesome and very welcoming cast/crew!

Robert H. Goodwin (Mr. Corbin)
Bob has appeared over the past few years in numerous productions in Central Jersey including The Importance of Being Earnest, A Few Good Men, Noises Off, The Odd Couple,  Inherit the Wind,  Shadowlands, On Borrowed Time, The Diary of Ann Frank,  Moon Over Buffalo, To Kill a Mockingbird, It’s a Wonderful Life, Almost Maine, Fiddler on the Roof, One Acts. Bob is also a cast member in a recently released film, A Thanksgiving Proposal produced by Silver Tree Productions. Most recently he has appeared in Miracle on 34th Street, The Triangle Shirtwaist Project, The Dresser, And Then There Were None, and Of Mice and Men. This is Bob’s fourth production with Dave McGrath, and this fine cast and crew.

Frank Leonhardt (Mr. Klemper)
Frank has appeared on stage many times. This is his first show here at Center Players. He is pleased to be performing  in this heartfelt and poignant show! Break Legs to the entire cast and crew!

Rich Dominguez (Senator Clark)
Rich is pleased to be appearing on Center Players stage for the first time. He has been in numerous productions throughout the area, namely, Simon in The Living Last Supper, Nono in a reading of The Night of the Iguana, as a small neighborhood kid singer in Bring You Smile Along, and as a background singer (Bob Mitchell Boys Choir) in Strange Lady in Town.

Dave McGrath (Director)
Along with several “Book in Hand Theater” readings, this is the third “Signature Series Production” Dave has directed here at Center Players. He is grateful to have the chance to present the personal stories of Tom Griffin’s characters. Working with this wonderful cast, Dave tries to bring out essentials that we all share, the everyday fears and joys, the need to care for and to be cared about, that we all can use some help to get through, and that underneath – we’re not so different. Dave dedicates this play to the staff of SEARCH Day Program School, Adult Center and Group Home- who share their time, talents and their patience to improve the lives of so many.